The Percolating Coffee Guy (Or T.P.C.G) is the Omnimatrix's DNA sample of a Efac El from Yuja.

T.P.C.G is 6"5. He has bird like feet, blue green armor like scales, bulky arms, and a tail. T.P.C.G has openings in his palms to shoot coffee. He has small spikes on his back.

Also, if he get's a different liquid inside of him the coffee will have different effects.

Here are the effects.

If the openings on his palms are covered up, and he shoots coffee, he will explode.

Efac El- The Efac El (Coffee in French backwards) are a lizard race that inhabit Jungle like aliens.

Yuja- A Jungle like planet that is now barren. Only a few Efac El's survived. Now only small buildings are left.

Kurt 10: Beyond Time and Space

He appears as a regular alien and first appears in Evan Levin vs. the Magic Mirror. 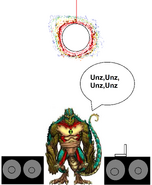 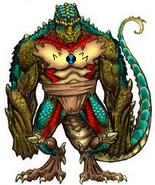 Jack as T.P.C.G
Community content is available under CC-BY-SA unless otherwise noted.
Advertisement