The Counselor is the Director's assistant in Bryce Bowman: Origins.

The Counselor is a dark-skinned man who keeps his hair buzz-cut. He wears the same outfit as the Director.

The Counselor is very calm, almost to the point of being creepy. He never seems to deviate from this state of mind. It is suspected that he is not human, based on his lack of emotion.

The Counselor exhibits extreme levels of serenity for a man in his position. You would expect him to be more stressed than he is.

It is known that the Counselor is highly intelligent, another reason that people believe he is not human. 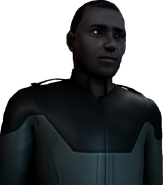 The Counselor
Add an image to this gallery

Retrieved from "https://ben10fanfiction.fandom.com/wiki/The_Counselor?oldid=884096"
Community content is available under CC-BY-SA unless otherwise noted.