Start a Wiki
The Conqueror is a villain in the series, Brandon 10.

In The Original Series, the Conqueror took the appearance of a male Human with black hair, seems pretty muscular and was tall. He wore a long red trench coat and a device that resembles a vest that had a red orb on it.

In Alien Force, the Conqueror changed disastrously since his last appearance. He now takes the appearance of a big, green Humanoid with very muscular arms and red blazing eyes. He wears a grey visor around his head, a big, red combat vest/chest piece and grey/blue combat leggings which are attached to his boots. The red orb is now inside the chest plate instead of upon it.

In Ultimate Hero, the Conqueror regains his Human appearance however, due to his genetic restoration, his appearance is slightly different and more rejuvenated from his Original Series look. Instead of a red trench coat or armor, the Conqueror now wears a red three-piece suit with a black waistcoat that has red buttons. He also has his short black hair again, however in a more stylized and slightly spiky way.

In The Original Series, the Conqueror was quite skilled in combat and was armed with his staff which can fire red electric energy at opponents. He can also summon his droids to assist him in battle or help with other things.

In Alien Force, the Conqueror is even more skilled in combat, has more durability, still remains armed with his staff that seems to be improved, and has the powers/abilities of 10 heroes that he conquered during his Galactic Code of the Galaxy episode. This includes flight, red eye laser beams, power gauntlet, super strength and more.

In Ultimate Hero, having been returned to his Human form, The Conqueror no longer has his alien powers. However, he has called back on his former abilities; taking use of his Conqueror Droids to serve him. Now being in a position of the government, he holds a good amount of power; enough to change Bellwood and turn it against his own nemesis, Brandon.

The Origin of the Conqueror is unknown.

In The Original Series, the Conqueror hid out in a forest; creating a droid army to take over the world. When he had heard of the power of the Omnitrix, he decided to use his droids to get the Omnitrix from Brandon but failed to a point where he had to claim it himself. On his short journey, the Conqueror ran into a Criminal Leader and decided to mutate her into his personal droid servant hybrid. He ordered her to defeat Brandon but. like his other droids, she failed to do so. The Conqueror then created a distraction in the city and lured Brandon to him in which they fought and he won. Brandon was then captured in his spaceship but he, however, escaped and destroyed spaceship after he defeated his droids.

The Conqueror then rebuilt his ship and droids and attacked Brandon once finished however instead of using droids to attack, the Conqueror created a device to destroy Brandon which instead sent him to an alternate reality. In the end, Brandon defeated both Conquerors with the help of Alternate Reality Brandon, Coco and Actual Reality Coco. After major reconstruction and travels in space, the Conqueror teamed up with the mutated-at-the-time Brandon Clone to destroy Brandon AND obtain the Omnitrix but at the time Brandon had unlocked Master Control which he used to defeat them both after Coco opened a wormhole to the Capture Zone and trapped them both there until the Conqueror escaped.

In between the Original Series and Alien Force, the Conqueror drifted into space, barely alive, with only one lift-support remaining. He was then taken by a salvage team who then experimented on him. The Conqueror then escaped from the testing chamber into a storage chamber. However he was still dying so he absorbed all of the DNA in the storage and mutated into a new, super, alien, mutant hybrid. Driven by his rage and disgust, the Conqueror killed the salvage team and took over their ship where he started rebuilding everything he lost as the beginning of his Conquering spree. He then, using the Galactic Code of the Galaxy, challenged, defeated and then took the powers of the heroes of the worlds he conquered.

During his time in space, the Conqueror visited villains and locations that Brandon had encountered to gain information and resources on how to defeat Brandon. He found a device and created his own planet with it and headed to a prison that he saw in a cave painting on Warasauria. The Conqueror gained information from Ghost Brandon and destroyed him to protect the universe but Ghost Brandon faked his death, escaped, took over his body and conquered his world. The Conqueror was then forced to team up with Brandon to destroy Ghost Brandon. The new-bred Pesadilla forces then mutated into the same species as the Conqueror giving him a new family on his own planet. The Conqueror, after exiling Brandon from his world, thought about the information he collected and finally found Enginia; the holding place of The Ultimate Device.

The Conqueror then learns the truth about the device now knowing that it is an Omnitrix-in-progress however an unexplained event divided the New Omnitrix into pieces scattered throughout the Universe in which the Conqueror then went on a hunt for it. After locating the first piece in a time rift, the Conqueror managed to obtain it after escaping Brandon as Lodestar as well as the Extreme Bikers. He then tracked a more clearer signal to Unibeka in which he forces its Gatekeeper to unlock the arc as he retrieves it. Next he traced the next signal to Marshia which was releasing signals which made technology dysfunctional. He then used emergency power and settled on the planet until Brandon and his team were able to lure him there. He then escaped with the third piece. Now with three pieces of the New Omnitrix, The Conqueror broke Brandon's Clone out of the Mechanic Prison and provided for him at his home planet. The Conqueror was then guided to the mysterious planet of Sepulazia by the three pieces of the Omnitrix. After failing to defeat the team after the final piece, he landed on the planet and faced off against Coco and Sarah. He was then challenged by Brandon whom he used to, accidentally, find the way into the core of the planet. From there, he took the final Omnitrix piece from a rift in space and time and escaped the planet before it imploded. He then made his way back to Conqueria with all four pieces and gave them to Brandon's Clone where he would be sent back to Earth with the pieces to begin assembling the New Omnitrix.

When the Conqueror went to check on the New Omnitrix, it was just completed and he then set an alliance with Brandon's Clone in order to defeat Brandon and gain the Omnitrix for both of their needs. After Nodnarb (formally Brandon Clone) defeated Brandon, the Conqueror forced him to surrender the Omnitrix. When he did, the Conqueror took the Omnitrix and influenced Nodnarb to kill Coco and Sarah however they were foiled by Bill and Erudiden. The Conqueror then revealed his new plans to use the Omnitrix to fuel his new genetic droids and the New Omnitrix for himself. He then used his new droid army to defeat Nodnarb in his Ultimate Crusher form. When Nodnarb was defeated, The Conqueror brought him on board his ship and locked him away so that when he woke he would have him customize the Omnitrix to suit his needs by undergoing an operation which put the Omnitrix in his chest. When the Conqueror re-encountered the team, he was tricked by the Omnitrix's code system which caused it to activate its self-destruct sequence and damage its systems instead. The Conqueror then furiously transformed into a mutated version of himself and attempted to destroy Brandon and the team. He was then defeated by Ultimate Loch Ness and blown up with his ship for a second time.

After his last defeat, the explosion that had destroyed his ship had only managed to cripple him in his overly mutated form. In fact, the surge from the destruction of the Omnitrix had managed to reverse the effects of his mutations, all of them. Weakened and now in his Human form, the Conqueror was found by a Councilman and nursed back to health. However, upon awakening, the Conqueror had realized that the Councilman was actually planning to use the Conqueror for his own schemes and decided to get ahead of him by taking his life. Afterwards, the Conqueror used the Councilman's identity, wealth and power to build his new life on Earth. Upon learning that Brandon's secret had been revealed, the Conqueror had decided to take advantage of this opportunity to de-level the world's trust in him through a series of carefully planned attacks, using the name Mr. C when conducting illegal business with corrupt companies and organizations such as the Extreme Bikers. The final blow being Brandon's own trial. Due to an attack from a Bounty Hunter, caused by the Conqueror, the trial had to end for that day, allowing Brandon to do some research and finally discover the identity of the mysterious Mr. C. When the Conqueror had heard about this revelation, he had Brandon brought to his office where he can finally reveal himself. Now with Brandon exactly where he wanted him, the Conqueror had turned the tables on the hero by framing him into a criminal, causing him to flee the scene as a wanted man.

The Conqueror's goal in the Original Series, was to get Brandon's Omnitrix in order to gain a new type of power in order to rule the world and beyond.

In Alien Force, the Conqueror's goal takes after his name which is to conquer all that face him and all that get in his way. He plans on ruling the cosmos. And with the assistance of his new powers, he no longer feels the need for the Omnitrix but only to destroy Brandon Tennyson in any way possible. As seen in The Final Fight Part 2, these goals have changed and now he wants to use the Omnitrix in addition with the Ultimatrix to conquer the universe. These goals were then foiled by Brandon and his new goals remain unknown.

In Ultimate Hero, his goal seems to be basically the same as the other two which would be him obtaining and maintaining a sense of power in order to conquer something else. However, being in a position of power already, it feels as though he has already accomplished his goal but- knowing the Conqueror- his lust for power won't stop at being a simple Councilman. 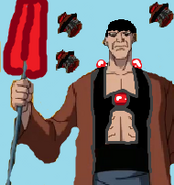 The Conqueror in the Original Series 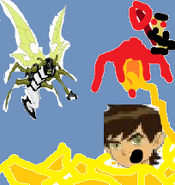 The Conqueror in Coco 10 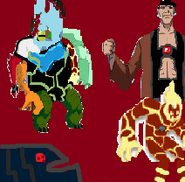 The Conqueror in Alien Force

The Conqueror in Key of Time

The Conqueror pleased in The Final Fight Part 1 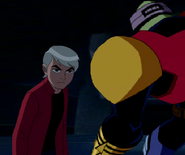 The Conqueror visiting Nodnarb in The Final Fight Part 2

The Conqueror in Trial by Ordeal
Add an image to this gallery
Retrieved from "https://ben10fanfiction.fandom.com/wiki/The_Conqueror?oldid=833006"
Community content is available under CC-BY-SA unless otherwise noted.