The Blacksmith, formerly known as Inspector 13, is a minor villain in Earth-1010. He first appeared in Death of Ben 10 Chapter 6. He is a cybernetically enhanced Techadonian from the planet Techadon.

He retains his appearance from Ben 10: Omniverse, a pale Techadonian wearing white overalls with cybernetic eyes. Now, however, he wears custom-made blue armour covering his chest and hiding his former designation as Techadon Weapon Master Number 13.

Inspector 13 was an emotionless objectivist, whose only interest was in scientific pursuit. He would rarely falter, and maintained a cold front that allowed him to commit heinous acts without hesitation should the situation require.

Now that he is the Blacksmith, he mostly keeps the same front but is far less secure with it and more prone to acts of emotion.

The Blacksmith is a master weaponsmith and engineer. There are few who can outclass him when it comes to designing and constructing military hardware.

He is generally very intelligent in most scientific fields, he has even been known to perform vivisections with expert skill.

He owns many weapons and dangerous tools, most of his own design or 'borrowed' from memorised Weapon Master schematics.

Prior to Death of Ben 10, the Blacksmith was evicted from the order of the Techadon Weapon Masters for his repeated failure to defeat Ben Tennyson and studying the Ultimatrix and T1 Omnitrix.

He briefly appeared in Chapter 6 wearing obscuring robes to sell a weapon to Liam. He later sold the same make of weapon to Pakmar off-screen.

The Blacksmith was the subject of an investigation by Ben, who had been lead to him by Timekiller. Ben was looking for information on the Lenopan Degradations. Two of the Blacksmith's Techadon Robots were destroyed before he was captured by Boarswax. He taught Ben about the Techadon Degradations. 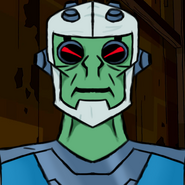 The Blacksmith in Burning Bridges
Community content is available under CC-BY-SA unless otherwise noted.
Advertisement