This is the property of NUKEMS WINS Entertainment!

Please do not edit this page unless you have permission or work with NUKEMS WINS Entertainment.

The planet was not always cold. The first few months of the planet's creation, the weather was quite nice. The ground was always solid rock, there were caves everywhere, and there were plants carried over from Thal-Bink. There were only two species on the planet at the time. The Thalian-Raan, humanoid bat-like creatures, and it's predator, officially named Thalian-Raan Eaters. They were named this because they were not given a name, and the galactic court decided the name. In fact, their appearance was not specified.

After the first few months passed, there was something unexpected. Some called it the Ice Age, others called it the Dark Age: An unexpected season occurred, officially named the Orckan, where it rains liquid snow. This type of rain is like a flood of liquid snow, rather than just drop by drop. Upon impact, it turns almost solid. This type of snow is the coldest in the entire universe. The Thalian-Raan Eaters were wiped out the first week of Orckan.

After one month of Orckan, the final month, the Thalian-Raan were near extinct, however two newborns, a male and female, were born with very warm fur. They were somewhat evolved. That ushered in a new sub-species of the Thalian-Raan, which dominated the species after a few years. To this day, the original Thalian-Raan species are very rare, as only two of them are alive out of the billions. After the first time Orckan ended, everything became somewhat peaceful. It snowed normally, the sky was always cloudy, it rarely rained, and ice tornadoes were everywhere. The normal, peaceful planet was turned into an icy nightmare.

The Thalian-Raan found a new species under all the snow, the Thalian Barids. They were a species made out of sentient snow, who could not move at all. Over time, the Thalian Barid discovered their abilities, and they were able to make skin made out of complete ice, and that helped them maneuver around, and use their abilities more efficiently. They could customize their own skin, make them look like whatever they want.

Everything but caves is covered in snow in Thal-Idge, and you can very easily fall into a quicksand-like snow, which you can never get up from. And it's practically everywhere. Every attempt at reaching alien astronauts on the planet has failed due to the nature of the planet, and technology would easily malfunction or fall into quicksnow. 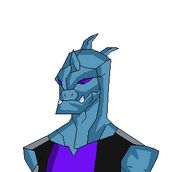 Sif Hunderson as Freezemore
Community content is available under CC-BY-SA unless otherwise noted.