TetraMight is a humanoid alien that is approximately 12 feet tall, has well developed muscles, two pairs of four-fingered arms, and red skin. A black stripe goes from his chin to his upper lip, making a mustache-like design. He has four eyes: a main pair, and a smaller pair below them.

He has three short spikes on the top of his head, a mustache-like desgin and has no hair. He has a black tank top like shirt with one large blue stripe in the middle, and black pants. He has a belt where the Atomnitrix symbol is located. He also has fingerless gloves, with blue cuffs at the wrist of his gloves.

TetraMight's most prominent ability is his enhanced strength, being able to lift several times his own weight and punch through various resilient materials with ease. His strength allows him to use anything as heavy as a weapon, from big rocks he can throw several feet away to beams and pillars that can be used as clubs.

TetraMight can create strong shockwaves by clapping all four of his hands together or slamming his fists on the ground.

TetraMight can jump several times his own height.

TetraMight has high durability, being almost fire and laser proof.

When under the effects of a cold, TetraMight's strength and stamina are greatly decreased, his skin turns from red to an orange shade and he develops pungent hives under his armpits. 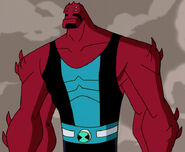 Add an image to this gallery
Retrieved from "https://ben10fanfiction.fandom.com/wiki/TetraMight?oldid=899702"
Community content is available under CC-BY-SA unless otherwise noted.