Terraspin is the Omnitrix's DNA sample of a Geochelone Aerio from the planet Aldabra set to appear in Bryce Bowman: Devil's Bounty.

Terraspin is a green, turtle-like alien with eight holes in his shell.

He also has large, flipper-like arms and stumpy legs. The tips of his arms have three holes each, which can extend finger-like claws to use as fingers.

The Omnitrix rests on his chest.

Green scales form on Bryce's arm around the Omnitrix and make their way up over his head. Bryce's shirt tears; a large brown shell growing from his back. He retracts into his shell, then twirls. Terraspin pops out of his shell and poses with his flippers in a karate-like stance.

Terraspin can create devastating wind blasts. When doing so, he retracts his head into his shell, opens a hatch to see, his fins become triangular, and his legs combine into a similar shape. His shell stays static and suspended while his limbs rotate at absurd speeds. The holes on Terraspin's shell eject powerful winds, as well as do the vice versa to create strong vacuums. He can use his winds to fly, blowing air to hover over the surface and uses his rotating limbs as propellers. Terraspin is able to use his powers to blast himself forward and up ramps.

Terraspin possesses enhanced strength. He also has superhuman durability when he is completely withdrawn into his shell.

Terraspin can extend the black holes at the tips of his flippers into finger-like claws.

Terraspin is selectively immune to spells and Mana.

Terraspin is immune to poisonous gas.

Like all Geochelone Aerios, Terraspin is capable of using magic.

If Terraspin's holes on his chest get blocked, his wind powers will decrease.

If Terraspin gets stuck to something and can't spin his arms and legs, his wind powers will be decreased even further.

Unless he is flying, Terraspin's body is cumbersome and not very agile. The position of his face gives him a very big blind spot and he has to turn his entire body around to see behind him.

If a small object is jammed in Terraspin's shell, it can cause him to stop in order to remove the obstruction.

Terraspin can be affected by magic if he isn't using his magic immunity, similar to Big Chill's intangibility. 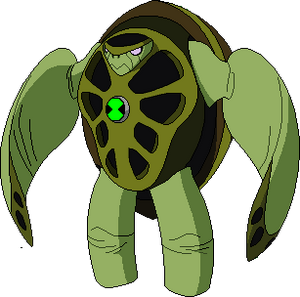 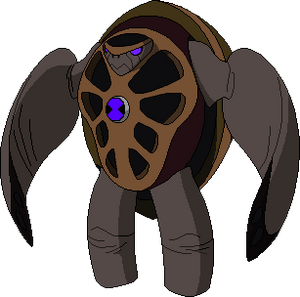