Teresa Challice is the main character of the series Tech Cross.

Teresa was born on July 12th, 2002. Her father died at a young age, leaving her mother to care for her alone. Because of this, her mother took on a higher-paying position at her work that required them to move around the country every several months, making it difficult for Teresa to establish meaningful friendships.

Eventually, when Teresa was old enough to take care of herself, her mother purchased a permanent house in Salt Lake City, a growing hub for air travel and technology. This allowed her mother to leave on extended business trips while giving Teresa a far more stable life.

Despite this, years of not being in the position to make friends left Teresa unable to socialize properly, and with her mother now leaving her to do business, Teresa was left extremely isolated. This drew the attention of the CrossTrix, a sentient Omnitrix looking for a wielder without any close relationships that could be jeopardized by its presence.

Decidedly good-natured and endearing, Teresa's primary concern in life is the wellbeing of others. She doesn't particularly like conflict and will try to end any confrontations peacefully if possible; that said, if someone else is in danger, she won't hesitate to step in and take on whatever is threatening them, even at the cost of her own life.

While a good thing from the outside, this personality ultimately stems from years of child abuse and bullying conditioning her into believing she's worthless, and she largely views herself as only being useful as a human shield. She criticizes herself extremely harshly, and will actively isolate herself from her peers if she feels like a burden to them.

After her extensive torture at the hands of Malincious Crow, Teresa's PTSD severely worsened, making it nearly impossible for her to do anything without outside support. Upon encountering Crow again in Star X Lovers, she completely shuts down, frozen in terror and unable to move until she transforms into NeOhm.

In spite of all this, Teresa occasionally lapses into a violent, anger-driven personality that displays ruthless cunning and efficiency. She hates this part of herself and actively tries to suppress it, seeing it as an inheritance of her mother's violent rages. This part of her rarely boils up, but the sight of loved ones being severely hurt is almost guaranteed to trigger it, usually resulting in a swift and gruesome takedown of the parties responsible.

Teresa initially lacks any natural abilities of her own, instead relying on the CrossTrix to transform into aliens with their own powers.

After fusing with Nova, Teresa now carries Void Energy in her body, making her immune to most temporal shifts and erasure.

The CrossTrix is a sentient Omnitrix created under mysterious circumstances. Based on the same technology as the EvoLock system, the CrossTrix is able to transform its user into ten different aliens depending on their selection.

The 411 Cross Bullet is a hovering bullet train stored inside the CrossTrix as a literal bullet. After being fired, the Cross Bullet expands using mass-shifting technology into its full form, allowing it to be used as a fast and efficient method of travel across long distances. 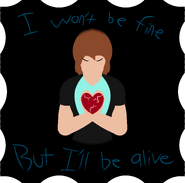 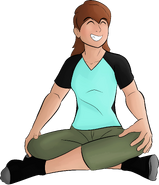 Teresa and Anne resting under a tree as the sun sets at Liberty Park.
Add an image to this gallery

Retrieved from "https://ben10fanfiction.fandom.com/wiki/Teresa_Challice?oldid=924325"
Community content is available under CC-BY-SA unless otherwise noted.