Tenryujin is a minor character in Tech Cross. She was the genetic donor for Daitenryu.

On her home planet, Tenryujin always stood out as being loud and energetic, a stark contrast to the reserved behavior expected in her society. As such, despite her friendly nature, she was generally disliked and seen as a nuisance. As she grew up, this general opinion of her gradually sunk in, and she fell into a deep depression as she forced herself into conformity.

One day, when she had grown into a young adult, a spacefaring merchant came through her community, peddling various trinkets from planets all across the galaxy. One of the items just so happened to be a J-Pop album, the cover of which caught Tenryujin's attention. The merchant explained what the item was, and Tenryujin's eyes sparked up. A planet where being loud and energetic while singing was not only tolerated, but encouraged?.

She knew exactly what she was going to do.

Tenryuin used her savings to immigrate to Earth, where she met and became close friends with Dr. Emilia Krauze, who introduced her to fellow music-loving alien immigrant Sonance. The two quickly became inseparable, pairing up to create a band with Sonance's music production skills and Tenryujin's singing abilities. After some initial difficulty finding their footing, the two became a smash hit in Japan, capitalizing on the "cute + cool" aesthetic the pair exuded.

Tenryujin has an extremely happy-go-lucky, upbeat personality that perfectly suits her career as a pop idol. She loves the excitement of playing concerts and meeting fans, which can make it hard for her to turn people down. She can be very naive, especially in regards to Earth culture, but she is no way stupid, and she has a knack for discerning the feelings of others.

While being very loving in general, Tenryujin is especially dedicated to Sonance, her partner in both life and the music industry. Initially unsure of her exact feelings, she eventually realized she was in love with Sonance, and the two now enjoy a happy relationship together.

In her natural form, Tenryujin has the ability to perform ethereal hymns that have control over the medium of "flow"; time, water, music, speech, anything with a flowing rhythm to it falls under her domain. She doesn't control any of these elements directly; rather, the way they play out is influenced by her song.

For example, she can slow down or speed up the flow of time with different hymns but she cannot create or erase time; she can change the direction of a river, but not add or remove water from the stream; she can smooth out or garble someone's thought process, but not influence the thoughts themselves, and so on and so forth.

Tenryujin exudes a heavenly aura that soothes the souls of those around her and makes her difficult to attack directly. In addition to this, she can use this aura to selectively grant good fortune to people. 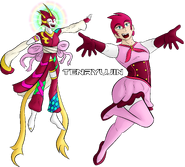 Retrieved from "https://ben10fanfiction.fandom.com/wiki/Tenryujin?oldid=896519"
Community content is available under CC-BY-SA unless otherwise noted.