Techadon Degradations, Technically known as Techadon Biological Integrations, are relics of the Heaven Wars long since thought to have been totally lost. They were rescued from the ancient past by MALtuant to wage his Time War in the present day. They exist in Earth-1010.

The Techadon Weapon Masters invented the degradations as a way to weaponize their opponents. In the early years there were useful as infiltration units, however word of them soon spread. They were still useful for passing genetic gates, however. According to The Blacksmith they could clear a planet of its defences within hours.

Late in the war they were recalled to the Techadon homeworld to prepare for a full invasion from the Ramiel Monoliths. However, before the Monoliths arrived the Degradations vanished entirely leaving them totally exposed. Ben Tennyson theorised that a Chronosapien may be responsible, and he was later revealed to have been right in The Only Good Necroterran when it is revealed that MALtraunt had stolen them all to fight in his Time War (although Ben would never know this).

The Techadon Degradations first appeared in Ben 10: Reboot Revolution Chapter 2, when two Lenopan Degradations were sent to attack the Bellwood Plumber base. Timekiller had no idea why they were there, but he later realised they were sent by MALtruant.

4N8S appeared in From The Ashes. He had been forced to work as a bodyguard for the ruler of Pyros ever since Apollo took control of the planet. He was sent to fight Ben when the latter helped the Starlit Sky storm the Castle on the Invictus Flats. But 4N8S refused to fight, knowing that Ben could liberate him and his people, and allowed Ben to proceed to capture Ignis.

The technology was not lost in this timeline and, although they are no longer used to fight in the Techadons' wars, they are sold off just as the Techadon Robots are in our timeline. Ro-pollo is one such example.

As part of a deal with Timekiller and MALtruant, the Blacksmith has been able to create new Degradations in the present day. They all wield prototype Techtrix devices and serve varying purposes to aid in the Blacksmith's plans.

As of Life On Earth they have all been destroyed or captured along with the Blacksmith himself.

Most of the modern degradations were not described in any detail and were sabotaged by Kai and unable to activate. 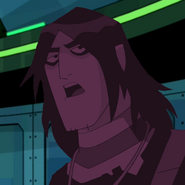 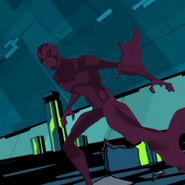