A few months after CaT abandoned the original Tech 10 continuity, he decided to start up a new continuity, one that gave him a fresh slate to write about whatever he wanted without having to create an entirely new series from scratch. This new continuity began with Tech 10: Rebooted, which launched on January 30, 2012.

This series was then abandoned as well.

After around a year-and-a-half, CaT finally got his act together and returned to work on the series for reals this time, deciding to retcon it as an alternate timeline still in continuity with the first two series. This new version of the series began on March 21, 2014, and ended on November 13th, 2015, with a total of two seasons, twelve episodes, one short, two soundtracks, and a 'Behind the Scenes' that mostly focused on Season 1.

Tech 10: Rebooted follows the adventures of Isaac Matthew Logical, known better as Teknois Neferus Logical, or simply Tech for short. After an incident involving Vilgax and The Puppet Master, a malfunctioning combat drone carrying the SpecTrix crashed to Earth, where it was found by Tech and Aquadilus.

Taking place right after the events of Omniverse, Ben has left for his 'universal road trip', leaving Earth without a major superhero. Tech must now use the SpecTrix to protect the Earth, but with the looming threat of an unstoppable force of evil on the horizon, even all the power of his transformations may not be enough to save the universe.

The original cover art for the series. (January 2012) 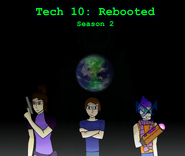 The Season 2 cover art for the series. (August 2015)
Add an image to this gallery
Retrieved from "https://ben10fanfiction.fandom.com/wiki/Tech_10/Rebooted?oldid=918914"
Community content is available under CC-BY-SA unless otherwise noted.