N/A; from the Pulsus Quasar

TBA
System Error is the Omnitrix's DNA sample of a Era-M Pulsusoid from the Pulsus Quasar. He is a free-to-use alien, and exists within the Earth-216 universe, the main universe of Multiverse vs. Tennyson.

System Error's true form, anchored down by the two major components of his mechanical suit, is a living mass of constantly-crackling, shifting electromagnetic radiation, primarily white with a jagged, light-teal-blue outline, and a "face" that of a darker-blue splotches forming small white facial features.

The Omnitrix symbol is located on the center of the front of the upper-half of his suit's lower-body, in a belt-buckle-like position, with two smaller, metal-rimmed ones akin to the ones on his palms to the sides of the symbol.

System Error's primary ability is his generation and manipulation of volatile electromagnetism, generated from his electromagnetic "true form" and conducted through the large orbs on his shoulders and wrists to be filtered and released into the open holes on his palms. Compared to most electric aliens, System Error lacks high precision with his electrokinesis, and thus, does not release in the form of accurate beams, instead in the form of large orb-shaped masses of electromagnetic energy that violently explode on contact with solid matter.

System Error's electromagnetokinesis can not only allow him to effortlessly generate powerful EMPs (electromagnetic pulses) that neutralize and disable nearby electronics, strong enough to even temporarily stun and lock up primed Omnitrixes, but also release and emit neutrino whitewashes, that of biological EMPs that can disrupt the biological functions in organic creatures, able to shut down one's brain to render them instantly unconscious, and disrupt specific biological abilities, such as body manipulation, telepathic communication, and unicellular mimicry.

System Error can use the magnetic aspect of his electromagnetokinesis to grant him a similarly-volatile form of electrical telekinesis, able to greatly blast opponents back with mere projections of energy from his hands, level the foundation of small buildings, and overload and virtually destroy massive areas of machinery. In addition, System Error's radioactive nature renders him invulnerable against all forms of radiation, even the mutagenic properties of Corrodium.

System Error's mechanical suit grants him enhanced strength, durability, and stamina, the latter of which due to the fact it acts as a constant fuel source for his anchored electromagnetic form, and thus, the possibility of System Error tiring out through simple physical attacks is nigh-impossible. In addition, his electromagnetic nature and mechanical suit both allow him to survive in the vacuum of space, and is immune to the magnetizing effects of Biosovortians.

Due to the fact he is indeed an electrokinetic alien, System Error is vulnerable to self-electrocution through exposure to water, and is highly susceptible through having his electricity absorbed through alien species such as Conductoids and Crystalsapiens.

System Error's abilities of generating EMPs and neutrino whitewashes are incredibly destructive, primarily the latter, and can result in human death if used at an extremely high intensity. In addition, compared to the electrical telekinesis Cerebrocrustaceans, his electrical telekinesis appears significantly more imprecise.

System Error's suit is not a containment suit for his electromagnetic body, but a generator and fuel source, meaning that if hijacked or disabled in any way, System Error's electromagnetic form will disperse and fade, which will result in the instantaneous detransformation of the Omnitrix wielder. His suit can be hijacked by Galvanic Mechamorphs, although he'd most usually be able to use his abilities to electrocute and ward off one in time, and dismantled by Planchaküles.

System Error is a free-to-use alien, so feel free to use him in your own series. 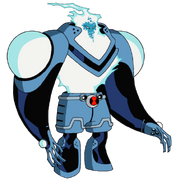 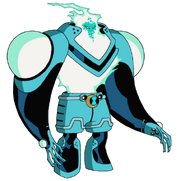 Ben 23's ZZZaps
Add an image to this gallery

Retrieved from "https://ben10fanfiction.fandom.com/wiki/System_Error?oldid=899017"
Community content is available under CC-BY-SA unless otherwise noted.