Ben 10 Fan Fiction Wiki
Register
Don't have an account?
Sign In
Advertisement
in: UltiVerse, Aliens, Ben 10: Protector of the Omniverse,
and 21 more

Swampfire is the Infinimatrix's DNA sample of a Methanosian from Methanos in Ben 10: Protector of the Omniverse. He is the Timeline 1 equivalent of the canon Swampfire.

While Swampfire has matured in this timeline, his matured form much more closely resembles his original form. He has his appearance from his first stage of puberty in Omniverse, but he has holes in his arms from which he uses his fire powers. He has spikes on his knees and feet, and a collar around his neck which stops below his eyes. His fingers are longer, and his arms and legs fade into brownish green. He has black pupils, and the petals on his shoulders, arms and legs are longer and now red. He has a wider waist and thinner calves. The Infinimatrix symbol is on his chest and is circular instead of hexagonal. His colors match the color palette of Heroes United.

As the transformation track begins playing, Ben hovers in a dark green background with light green bubbles pulsating rapidly behind him. His skin turns leaf green and he spreads his arms and legs, as his torso and overall muscle tone increase dramatically.

Swampfire has the ability to ignite methane in his palms similar to a flamethrower. After his blossoming, he ignites methane from yellow holes in his palms.

Before "blossoming", Swampfire's fire blasts were powerful enough to harm Vaxasaurians and Sonorosians. In his "blossomed" form, his fire blasts have become more powerful than before.

Swampfire is capable of limited flight through means of launching fire from his palms as jet propulsion, much like Heatblast. He is also capable of breathing fire.

Swampfire has a high degree of chlorokinesis, being able to telepathically interface with plant life, manipulate and instantly create biological agriculture, and generate a gas that makes exposed plant life elongate, enlarge and ensnare enemies, seemingly being mutated by the gases. Some plants have a brief green aura when he influences them.

Swampfire can generate seeds from his body that phase into or pierce into any ground or flooring before turning to vine tentacles strong enough to restrain a Highbreed and a Chimera Sui Generis. They usually are as small as pebbles, but they can sometimes become larger and sharper if used on a metal surface.

Swampfire's body can generate a type of mud that sticks to everything but him.

Swampfire is capable of regenerating and regrowing any damaged or destroyed body parts, allowing him to grow back lost limbs, holes in his body, or even his head.

Another method of regeneration involves reattaching detached body parts. This is accomplished by manipulating his vine-like "veins" and tentacles to reach out and meld with the insides of the detached limb and return them to the body, allowing him to reconstitute automatically if damaged.

Swampfire's methane has a very pungent smell that is intolerable to some species like the Incurseans, which will make them retch and faint. Using his methane abilities, Swampfire can produce "sleeping spores" that can render humans unconscious.

Swampfire has enhanced strength. However, he is physically weaker than Crystalsapiens, Tetramands, and Vaxasaurians. In his "blossomed" form, he appears to be even stronger than before.

Swampfire's body structure allows him to walk straight through thin spaces such as the gaps between iron bars.

Swampfire is able to extend his fingers and feet into long roots that can dig through rock.

Swampfire has rather strong teeth that are able to injure another Methanosian.

Swampfire can generate vine-like tentacles from his back.

Swampfire can grow plants from the ground simply by raising his hand, though he only gained this ability after "blossoming".

Also after "blossoming", Swampfire gains the ability to grow vines with a flame tip from his hands and use them as whips

Similar to Stinkfly's odor, Swampfire's swampy stench can make it hard for him to hide from anybody or anything capable of smelling.

Swampfire can be harmed by electricity, such as that generated by a Conductoid.

Swampfire can be immobilized by ice, such as the ice breath of a Necrofriggian, though he can thaw himself out by igniting the methane in the palms of his hands.

Swampfire's fire attacks can be canceled out by fire extinguishers.

Swampfire's body heat can make it difficult for him to fight opponents that are attracted to heat, like reptiles.

Originally, Swampfire was unable to control sentient plants, let alone weeds. This weakness is no longer a problem ever since he "blossomed". 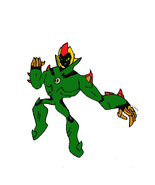