Start a Wiki
Study 5: Diamondhead/Chromastone is the fifth episode of Alien Biology with CaT. It focuses on trying to explain the biology of Diamondhead and Chromastone.

This theory has been bogging me down for months. I thought it would be a lot easier to bullshit an explanation for living rocks, but ding-dong, I was wrong. I kept hitting hard scientific roadblocks until I eventually switched tracks and ended up where we are now. Frankly, the whole thing feels like a joke on God's part, but I'm getting ahead of myself. Let's dive in.

My initial line of thinking was to find animals that had the appearance of rocks (and in a way that's where I ended up but I'll explain that later) and try and apply their biology to Diamondhead and Chromastone. The closest I got was Pyura chilensis, a Tunicate (a la Sea Squirts) that basically just looks like a rock with human flesh inside. 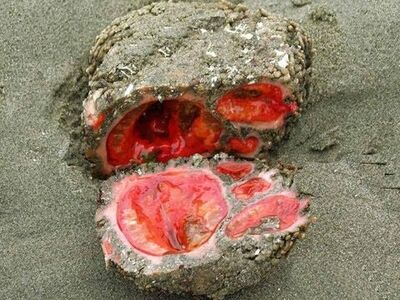 Also you can eat it. 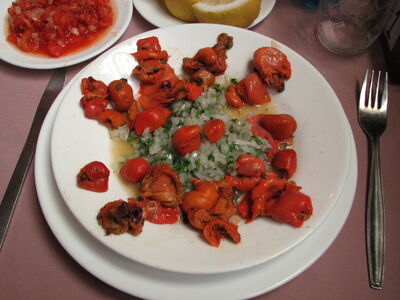 Of course, as we see in The Secret of Chromastone, Diamondhead (and presumably Chromastone, by extension), has all of zero internal organs outside of his head. That put the kibosh on a lot of lifeforms as we know them, so I decided to switch gears.

At this point, I've given up on the "lifeform" part and just look into how crystals grow naturally. Not living crystals, just regular crystals. Turns out they need very specific conditions to form, and since Diamondhead can just magically grow back lost chunks of his body in normal Earth conditions, that's not gonna work either.

Eventually, I'm getting annoyed. Goddamn Ben 10 aliens and their goddamn biology that doesn't make any goddamn sense. What the hell kind of living thing has a rock-like body, no internal organs to speak of, and, from what we've seen of Diamondhead's regeneration powers, can just make new chunks like it's cloning its own cells WAIT A MINUTE

I look at my rock collection.

It doesn't do anything because it's a goddamn rock collection.

I look at my seashell collection.

The ghosts of sea creatures past are silently judging me.

I get up from my computer and open the container holding the seashell collection, beads of sweat dripping down my forehead.

This level of tomfoolery cannot be.

I reach into the collection and shakily pull out a single piece of white calcium carbonate.

"What sick twist of fate is this?" I mumble, stumbling backward as the world crumbles around me.

I collapse to the floor as the laughs of long-dead polyps haunt my mind.

Yeah, Diamondhead and Chromastone are coral.

What do you want from me

For those of you unaware (somehow), coral is an animal that lives underwater. Coral is unique in that it is actually a colony of multiple smaller animals called polyps, which are related to jellyfish and sea anemones. A polyp usually begins life as a solitary animal, and some species remain that way for life, but most end up finding a place to hunker down and create a limestone exoskeleton around their base. After this, they begin budding or cloning themselves, producing an entire colony without the need for sexual reproduction. Every member of this colony also secretes an exoskeleton, creating the hard, stone-like structures people usually refer to when they're talking about coral.

Obviously, if Diamondhead and Chromastone were made up of coral, said coral would need some significant evolutionary upgrades. Using silicon-based minerals instead of limestone, being programmed to form into a humanoid shape, creating extremely specialized polyps to serve as eyes and vocal cords and what not, a centralized intelligence, etcetera, etcetera. Suffice it to say that if any coral went down this evolutionary path in real life, it would be advanced enough that we wouldn't even call it coral any more than we call humans monkeys; regardless, coral would still be the most likely base organism for a lifeform like this to evolve from.

Retrieved from "https://ben10fanfiction.fandom.com/wiki/Study_5:_Diamondhead/Chromastone?oldid=848570"
Community content is available under CC-BY-SA unless otherwise noted.