Start a Wiki
Study 4: Nanomech is the fourth episode of Alien Biology with CaT. It focuses on trying to explain the biology of Nanomech.

Nanomech has been the subject of some debate ever since his first appearance, and it's not hard to see why. He's the only alien in Ben's arsenal that's explicitly half-human, and the only 'fusion' used as its own DNA sample. I'm here to break down this alien and take a look at what makes this little bugger tick.

Just to get this out of the way, Nanomech's design has gone through several extreme variations that make pinning down his exact biology something of a nuisance. In situations like this, I prefer to use UAF designs as the reference, as they're a more mature example of their species than their OS counterparts, and UAF's bland art style avoids potential issues created by OV's art style exaggerating proportions.

Though Nanomech in particular also has a live-action design from the movie he debuted in, I'll be sticking with the UAF design for simplicity's sake. It's more similar to the movie than OV's design (although much less detailed), and it works as a good middle-ground between the movie and OV designs in general.

For an in-universe explanation of the differences between Nanomech's designs, it should be noted that each design appears on a different Omnitrix (Reformatted Omnitrix in AS, Ultimatrix in UA, and OV Trix in OV), so it can be assumed that each Omnitrix has a different fusion protocol for how the sample should be constructed. Speaking of which...

This aspect of Nanomech seems to confuse a lot of people, and I'm not entirely sure why. It was established in OS that the Omnitrix is capable of making fusions, and it can be assumed that the AF Omnitrix has a more stabilized version of this function thanks to the reformatting. It's also been established that the Omnitrix automatically modifies aliens to make them useable, albeit inconsistently and to varying degrees of effectiveness.

The main concern presented in Alien Swarm in regards to Ben transforming into one of the nanochips is that the chips have a hivemind, which presents the strong danger that Ben could lose his individuality and become part of the swarm. This would obviously be detrimental to Ben for several reasons, and combined with the fact that the individual chips themselves are limbless and overall pretty sucky, this would make Ben turning into a pure chip a bad experience all-around.

It can be presumed that the Omnitrix actually did its goddamn job for once and made the chip DNA safe to use by merging it with Ben's own human DNA, allowing him to retain a humanoid form and an individual mind while gaining the powers of the chips. This is directly implied by Ben's initial transformation into Nanomech, which consists of Ben's normal human form being shrunk down to chip size before being modified with biomechanical chip parts to become the new alien. This sequence indicates that we're seeing the Omnitrix generate the fused DNA sample in real-time, making it unique among transformation sequences.

Nanomech's biology, which seems to vary slightly according to which Omnitrix generates it, follows the general pattern of a human body modified with biomechanical chip parts and DNA. This results in an internal system eerily similar to a human's, albeit with a bit of warping to accommodate the chip DNA. 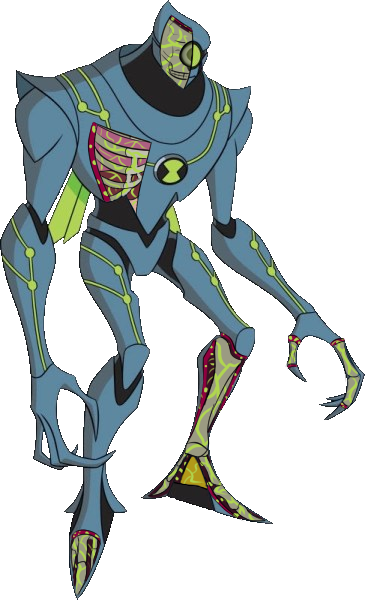 Notable changes to the human body structure itself include:

And of course, the obvious additions such as metal plating and wings, but those aren't really modified human parts as much as they are grafted chip parts.

Nanomech is an anomaly of an alien that isn't really hard to explain when you think about it. I don't have much else to say about him, so I guess that's that.

Retrieved from "https://ben10fanfiction.fandom.com/wiki/Study_4:_Nanomech?oldid=848569"
Community content is available under CC-BY-SA unless otherwise noted.