Start a Wiki
Study 3: Armodrillo is the third episode of Alien Biology with CaT. It focuses on trying to explain the biology of Armodrillo.

Armodrillo is an alien that isn't really talked about much. He's a perfectly serviceable alien that doesn't lend himself to much controversy. Something that seems to pop up around the rare Armodrillo discussions, however, is the question of whether or not he's a fully organic lifeform. I personally believe he is, and I'm here to explain my theory behind that.

The main point of focus here is going to be the following diagram, which the rest of the episode will center around elaborating on. 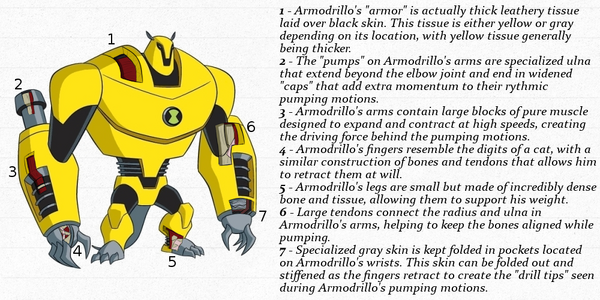 As stated in the diagram, Armodrillo's armor is a thick, leathery tissue laid over black skin. The reason it seems so metallic is because...well, it is! Armodrillo's species likely evolved to burrow underground in search for ores to consume as food. The metal from these ores are incorporated into their biology in varying degrees, with the most metal being concentrated in their armor; this is not unlike metals such as iron and calcium being integrated into the human body, albeit in a much more extreme fashion.

The bone making up the pumps is abnormally dense, especially in the caps located at the end of the ulna. The purpose of the caps is twofold: one, to created extra momentum during pumping, and two, to prevent the ulna from sliding too far forward during especially fast pumping. Older Talpaedens often have their caps wear down over time, making them much more susceptible to injuries such as dislocating their ulna and tearing the ligaments and muscles that help keep it in place.

The muscles on Armodrillo's arms are ridiculously powerful, expanding and contracting at speeds only comparable to that of cardiac muscles in humans. Having muscles this large and powerful comes with a cost, however; the pumping muscles alone take up 35% of a Talpaeden's caloric intake, and they're highly vulnerable to cramps if pumped incorrectly.

Armodrillo's hand contain a retraction mechanism for his fingers similar to the claws of a cat. A tendon located in this structure must be retracted in order to extend the fingers outside of their wrist caps; when this tendon is relaxed, the fingers retract, making it easier to keep them protected during pumping. Older Talpaedans may have trouble retracting their fingers for various reasons, making them more liable to pumping-related injuries in this regard as well.

While Armodrill's tail is crucial to providing the necessary counterbalance keeping Armodrillo upright, his legs are responsible for moving around his massive upper body, the weight of which puts a huge amount of stress on them. As a result, his legs are extremely dense, packed with the toughest bones and muscles in Armodrillo's body outside of his arm pumps. While it may seem counterintuitive to have short legs for a massive body, it actually makes Armodrillo's weight more manageable by bringing his center of gravity closer to the ground. Talpaedans with taller legs often suffer from bone fractures as a result of the increased stress placed on them.

Just to clarify something, I got the terminology wrong here in the diagram. Ligaments connect bones to other bones, whereas Tendons connect bones to muscles. They're made of the same material, but their location is different. Regardless, the ligaments and tendons in Armodrillo's arms are both important to keeping his pumps in proper rythm and alignment.

Armodrillo's drills are the most metallic organs in his body, giving them the durability needed to carve through solid rock. Usually folded up in organic pockets in his wrists, the modified skin comprising the drills is folded out over the end of his arms and stiffened in a rotary shape to form the drill bits. Now, you might be wondering how the drills spin given the inherent issues with creating free rotation in multi-cellular organisms.

That's more or less why this episode took like four months to come out.

Given their location, the three main problems presented for Armodrillo's rotary drills are:

You could also argue Friction is a problem, but as most people can tell you, organic bodies are more than capable of secreting lubricants all on their own.

The drill mechanisms include a ring-like bone the specialized skin attaches to. The underside of this bone has growths of sloped "teeth" on it that catch similar "teeth" located on a ridge on the ulna while pumping occurs, forcing the drill mechanism to rotate.

The drill mechanisms are not always rotating; while at rest, they naturally settle into a position that carefully connects them to a single cartilaginous tube running down the side of the ulna that contains nerve endings and blood vessels. The openings of the drill mechanism and the tube each have an epiglottis-like flap of cartilage that seals them off during rotation, preventing internal blood loss.

This setup is delicate and comes with its own share of downsides. The most obvious is that the drill mechanism and nutrition tube must be aligned extremely precisely in order for proper blood flow and nerve signaling to be established. While numerous dedicated sets of minuscule muscles exist to help facilitate this, improper alignment is a common ailment among Talpaedans with muscular dystrophy, and in the worst-case scenario, can lead to the drill mechanisms necrotizing and requiring amputation to prevent deadly infection.

This can also affect the growth of the mechanism itself. Young Talpaedans that use their drill mechanisms too much while growing can end up with small, weak drills as adults due to them not receiving proper nutrition during the growth cycle.

I didn't actually cover this in the diagram, but someone mentioned it to me, so I figured I should bring it up. Armodrillo's mouth is generally hidden under a flap of black skin that protects it from stray debris during the burrowing process. Talpaedans can talk just fine with the flap down, so they generally only lift it to eat.

Despite his robotic appearance, Armodrillo's biology can theoretically all be explained by organic attributes.

Retrieved from "https://ben10fanfiction.fandom.com/wiki/Study_3:_Armodrillo?oldid=848563"
Community content is available under CC-BY-SA unless otherwise noted.