Streak has a ghost-like body that heavily relies on projections. His arms are created by Omnitrix-made shoulder-mounted projectors, as his species natively does not have them. His slim figure is mostly robotic, with his two eyes looking in no particular direction and his mouth a line where audio is produced. His chest is a mix of forest green on the front and a camo green towards the back. His stomach has an additional set of eyes which are said to be constantly looking in other dimensions, much to its user's confusion. A wisp of flowing purple makes the tail in place of his legs, which float constantly.

His Assault Omnitrix symbol is on the left side of his chest.

In Ben 10 Unleashed: Time Rules, he looked almost the same, except that his Ultimatrix symbol was on middle chest, he has a line going from his forehead to his upper lip, a black surrounding the eyes on his stomach, and his tail looks different. His arms were also not holographic. 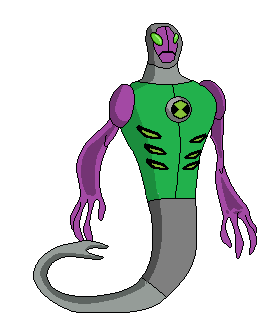 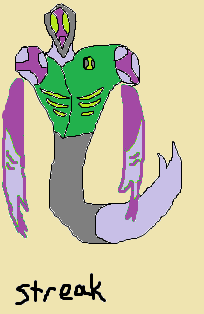 Back in Action: Alien Universe

This section is incomplete.

Back in Action: Alien Universe