Stinkfly is the Omnitrix's DNA sample of a Lepidopterran from the planet Lepidopterra set to appear in Bryce Bowman: Devil's Bounty.

Stinkfly has a bug/insect body and four insect-like flat legs with two arms, whose hands are human-style ones with three clawed fingers. He has four pedunculated eyes that are quite large. These eyes are linked directly to the sides of his huge head. His wings are light green and very fragile with lines on them, and his limbs are a brown-greenish color.

The Omnitrix appears in the center of his head.

The Omnitrix is pulled into Bryce's arm as his skin turns green and his fingers are morphed into three black claws. Four eye stalks burst from the sides of Bryce's head, while black lines creep up over his face. He spins around, two large wings, four insectoid legs, and a tail with a large blade break through his back. He spins, the Omnitrix lights up on his forehead, for a second only. Stinkfly beats his wings quickly.

Stinkfly was unlocked by Azmuth in The Darkest Night: Part Two.

Stinkfly first appeared in The Avengers. He was only used to transport Bowman from the Avengers tower to a crisis happening downtown.

Stinkfly can excrete high pressured streams of liquid from the pollen ducts located inside of his eyestalks and mouth. These liquids can be both a flammable toxin or an immobilizing adhesive, enough for him to swing from it by his mouth. His stink comes from the oils he secretes to keep his exoskeleton joints moving.

Stinkfly is able to emit a powerful herbicide gas.

Stinkfly's tail is extremely sharp with a stinger-like end that can tear and rend through steel almost effortlessly.

Stinkfly's exoskeletal body is fairly strong, allowing him to survive unscathed while being smashed through buildings and being caught inside a large explosion.

Stinkfly has great strength in proportion to his body, being able to carry heavy loads while maintaining steady flight.

A more minor inconvenience is Stinkfly's odor, which can be a problem if he is trying to hide from anything or anyone that can smell.

Stinkfly is extremely weak to any kind of chemical, poison, or gas.

Although his exoskeleton body is fairly strong, Stinkfly's wings are very fragile. Water is especially a problem for him, as it can render him incapable of flight if he gets too much on his wings. Furthermore, he cannot swim very well due to the small surface area of his limbs.

Stinkfly can be tied in place by his tail.

Stinkfly is vulnerable against electricity.

Being a Lepidopterran, Stinkfly's goo can be neutralized by the fog of his natural predator, the Buglizard. 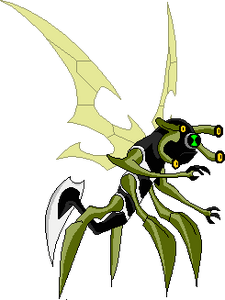 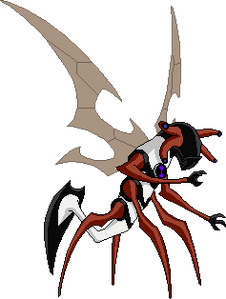