Ben 10 Fan Fiction Wiki
Register
Don't have an account?
Sign In
Advertisement
in: UltiVerse, Aliens, Ben 10: Protector of the Omniverse,
and 19 more

Stinkfly is the Infinimatrix's DNA sample of a Lepidopterran from the planet Lepidopterra in Ben 10: Protector of the Omniverse. He is the Timeline 1 equivalent of the canon Stinkfly.

Stinkfly has his Ultimate Alien appearance, but his legs are much bigger and his lips are uneven, akin to his Ben 10,000 appearance. The black stripes on his outfit are now green, and the second segment of his outfit is fully black. His skin is also darker. He also has black pupils and black gloves. The Infinimatrix symbol is on his chest. His colors match the color palette of Heroes United.

As the transformation track begins playing, Ben hovers in a dark green background with light green bubbles pulsating rapidly behind him, as he crouches down.

Stinkfly can excrete high pressured streams of liquid from the pollen ducts located inside of his eyestalks and mouth. These liquids can be both a flammable toxin or an immobilizing adhesive.

Stinkfly's slime has properties akin to fire extinguishers, meaning that it is capable of putting out fires.

Stinkfly is able to suck up his slime from his mouth to pull himself upwards.

Stinkfly is accompanied by a natural odor-like stink that comes from the oils he secretes to keep his exoskeleton joints moving.

Stinkfly's black tail is extremely sharp with a stinger-like end that can tear and rend through steel almost effortlessly.

Stinkfly's exoskeletal body is fairly strong, allowing him to survive unscathed while being smashed through buildings and being caught inside a large explosion.

Stinkfly possesses enhanced dexterity, being able to operate a cell phone with his three-fingered hands.

Stinkfly has great strength in proportion to his body, being able to carry heavy loads while maintaining steady flight.

Stinkfly's claws and sharp-pointed legs allow him to cling onto solid surfaces.

A more minor inconvenience is Stinkfly's odor, which can be a problem if he is trying to hide from anything or anyone that can smell.

Although his exoskeleton body is fairly strong, Stinkfly's wings are very fragile. Water is especially a problem for him, as it can render him incapable of flight if he gets too much on his wings. Furthermore, he cannot swim very well due to the small surface area of his limbs.

Stinkfly can have trouble carrying very heavy things for a prolonged amount of time.

Stinkfly can be tied in place by his tail.

Stinkfly is vulnerable against electricity.

Being a Lepidopterran, Stinkfly's goo can be neutralized by the fog of his natural predator, the Buglizard. 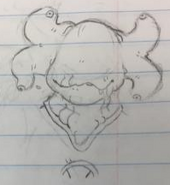