Start a Wiki
Stink Breath is an alien transformation in Brandon 10.

In Alien Force, Stink Breath takes the appearance of a humanoid in garbage-green armor. He wears a helmet of the same color which black lines on it; it only makes his eyes visible. There are grey patches on his shoulders and black gloves. On his back, there is a grey-ish jet pack powered by gas that is produced from his body within the armor. His skin is a green similar to Dark Oliver Green. The Omnitrix symbol is on his chest.

In Ultimate Hero, Stink Breath's appearance does not change majorly from his Alien Force appearance. The Ultimatrix symbol is on his chest.

Stink Breath has the ability to produce acidic breath from his helmet's air vent as well as fire regular gas clouds. These clouds can also be used to blind enemies temporarily when they are resistant to the smell. Stink Breath can use his gas-powered jet pack to fly; He can use this to produce a gas-cloud trail. His armor also gives off some durability and strength as seen in Tree of Life. He can combine his gas with fire as explosives against opponents. As seen in Riddle Diddle, Stink Breath can also use his gas to expose hidden lasers and such.

Stink Breath's skin is very delicate and wrinkled and he could suffer painfully if it touched. As seen in Princess Problems, Stink Breath's gas can trigger an explosion when near flames and he can get caught in the blast.

Stink Breath in The Bounties 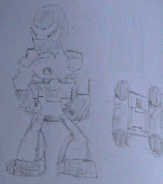 Making of Stink Breath 3
Add an image to this gallery
Retrieved from "https://ben10fanfiction.fandom.com/wiki/Stink_Breath?oldid=866598"
Community content is available under CC-BY-SA unless otherwise noted.