Steve is an alien from Outer Space based on the epic world of his name! He has no home planet since he is usally moving around. His species is not known either since he looks different to everyone.

Since everyone sees him differently he has no set appearance.

His set of powers is different from series to series.People can put down whatever they want, as long as he does not become too overpowered. List his powers below.

He makes a quick appearance in The Wonderful World of Utility without saying anything, he has these powers:

Same with his powers, whatever people want.Just don't make him too weak either.List the weaknesses below as well.

Every scene he is seen as a different appearance, too.

He is a rubber ducky by Batking's Eyes 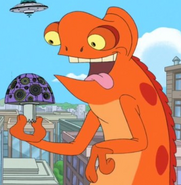 Steve in Roads' eyes. He's eating a purple Super Mushroom! That explains how he got so big... 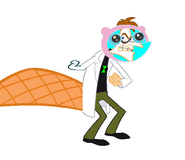 Lath's Steve
Add an image to this gallery
Retrieved from "https://ben10fanfiction.fandom.com/wiki/Steve_(Alien)?oldid=866592"
Community content is available under CC-BY-SA unless otherwise noted.