Stampede is the Omnitrix's DNA sample of a Rhinsapiens from the planet Serass set to appear in Bryce Bowman: Devil's Bounty.

Stampede is a tall, grey rhino who stands on two feet.

His entire body is covered in a kelvar-like grey hide.

Stampede has a large horn protruding from his forehead.

He also has a short tail.

The Omnitrix sits on his chest.

Bryce's arm quivers as grey liquid seeps through his veins, up through his shoulders and into his face. A large horn bursts from his forehead. He slams his hand into the ground, looking up as Stampede raises his other arm just barely off the ground and he roars.

Stampede is incredibly strong, enough to take on an Appoplexian in a fist-fight.

His skin is almost impenetrable all Earthly materials and weapons, very akin to kevlar.

When Stampede picks up speed it is almost impossible to stop him. His momentum builds exponentially with each step, making him truly an unstoppable force.

Similar to Rath and Spinosaur, Stampede can be very hard to control; although it's quite as severe as the other two. This is because Rhinosapiens are not very intelligent, one of the more feral species in the universe.

While his skin is very tough, he can be harmed by weapons made of energy and other-worldly materials that are stronger than Earth's strongest metals.

Being an unstoppable force isn't always a good thing. Very often, Bryce will need to revert to his human form or switch transformations to stop moving. Stampede is very stubborn, too, so making this decision is a challenge itself. 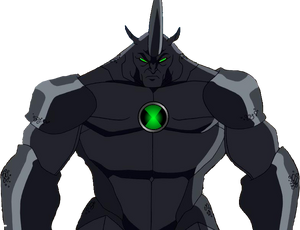 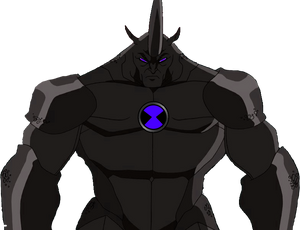