Splixsons are an alien species from the Earth-like planet Hathor.

Splixsons are small, humanoid creatures about the size of a 10-year-old human child. They have whitish arms and faces, and wear different colored clothes. Their hands are large and possess 4 digits, and their feet are merely stubs. They have 3 fin-like growths on their head, as well as metallic parts on their arms, head or waist. Different Splixsons have these parts at different places. Female Splixsons have three pigtails in place of the 3 growths that the males have.

Splixsons developed their duplication abilities to avoid predators, as they are low on Hathor's food chain.

Splixsons are peaceful creatures that work as farmers or artists.

Splixsons are able to infinitely duplicate themselves. Each Splixson is linked to their clones, which allow them to telepathically share each other’s thoughts. This connection also shares their pain, meaning if one clone is hurt, the rest all feel the exact same pain.

Splixsons are more flexible than a human, can breathe underwater, dig fairly fast with their hands, and can jump high.

Splixson clones share a link with each other, making it so that when one is hurt, all the others feel the same pain. If one is defeated/killed, the clones are automatically defeated/killed as well, thus negating the ability to form an army of clones.

Splixons are the prey of Panuncians, as the Panuncians are also able to infinitely duplicate themselves. 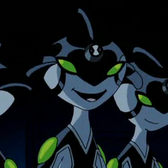 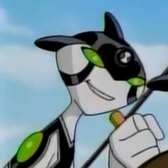 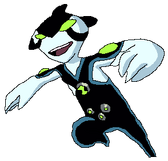 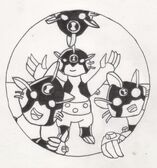 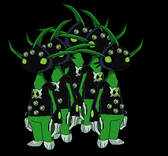 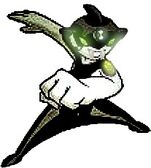