Spitter is the Omnitrix's DNA sample of a Sphoeroid from the planet Scalpasc set to appear in Bryce Bowman: Devil's Bounty.

Spitter is a bulbous alien resembling a pufferfish with that is colored green on its outer side and pale green on its inner side. He has three spikes sticking out the top and bottom of his head, arms with four-fingered hands, short and stubby legs, and a long tail. His mouth covers mostly the front of him, which is filled with pointed teeth, and his eyes are connected to the corners of his lips. He wears a pair of black pants that partly cover his stomach.

Spitter wears the Omnitrix on the back of his head.

The muscle fibers in Bryce's arm flow with green blood and crawl up into his face. He cringes as the blood rushes through his head, expanding it and mergin it with his body. His eyes open quickly and blast with yellow light as the slide down his face to the sides pf his mouth. Spitter crashes down and poses with his whole mouth open, roaring.

Spitter can inflate into a ball-like shape and spit out a concentrated blast of very slippery slime that can be made acidic.

Spitter has enhanced strength. He also has sharp teeth.

Spitter's slime can be highly conductive, enough for a Nosedeenian to electrify puddles of the slime to attack enemies.

Spitter is immune to poisonous gases due to his lack of nostrils.

Spitter can accidentally slip on his own slime.

Spitter can be unintentionally shocked due to his slime being highly conductive. 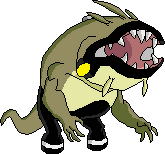 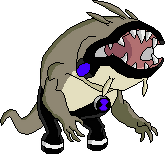