Start a Wiki
Spikeback is a Espinan from the planet Selva in Simien 10: Polyverse. This is a redone version of the original page, Spikeback.

Spikeback is a green alien covered with dark green spikes with a body build similar to Chromastone. Spikeback has one yellow eye and one spike on his head. His back has two long spikes, and he has longer spikes on his hands.

Spikeback is covered with very sharp spikes. To anyone touching him or hugging him, it can be extremely painful.

Spikeback can fire off his spikes. He can fire them out almost infinitely from the palms of his hands, or fire them off other parts of his body. The spikes are incredibly sharp and deadly. He can also fire off all the spikes on his body, creating a "spike explosion". However, he will need to regrow the spikes, as mentioned in the weaknesses.

Spikeback has a degree of enhanced agility.

Spikeback's spikes make it painful to make physical contact with anyone, as it hurts most creatures.

If he fires off most of his visible spikes, he will need some time to regrow them. This also happens with the spikes he fires from his hands, but it takes a lot of time to waste all the spike's ammunition. 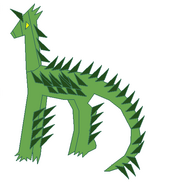 Spikeback without the name thing.

Another Spikeback by Lumin8
Add an image to this gallery
Retrieved from "https://ben10fanfiction.fandom.com/wiki/Spikeback?oldid=866537"
Community content is available under CC-BY-SA unless otherwise noted.