Spidermonkey is an alien with four arms, two pairs of green eyes, two legs, three fingers on each hand and three toes on each foot, blue fur over a dark blue center, and a tail with two stripes near the tip. Spidermonkey wears the Omnitrix/Ultimatrix symbol on his chest.

In The New Omniverse, Spidermonkey has three pairs of green eyes, his hair is flipped up, and he wears the Ultimatrix MK10 on his chest. The two stripes on his tail have turned grey, and the fur on his head is spiky with gray stripes. His nose has now shifted to his forehead and its shape has changed. He now speaks with the same voice as in Alien Force/Ultimate Alien. He also talks with monkey sounds in between words.

In The New Omniverse, the fur on his body is black and his skin is a reddish, pale shade of maroon, representing his ultimate form. The stripes in his hair and on his tail are light grey. The Recreated Ultimatrix symbol is on his chest.

In The New Omniverse, the fur on his body is white and his skin is a bluish, pale shade of grey. The stripes in his hair and on his tail are light grey. The Hero Watch symbol is on his chest. 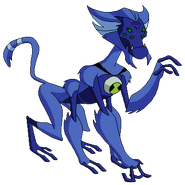 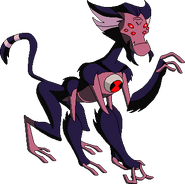 Albedo as Negative Spidermonkey (Made by CaT) 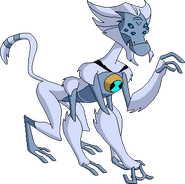 Ben 23 as Mr. Monkey (Art b CaT)
Add an image to this gallery

Spidermonkey has the ability to expel webbing from his tail, which were once stated to be as strong as steel, however species with as much or more strength than a Cerebrocrustacean can tear it. He can shape these webs into slings, or to swing across vast distances.

Spidermonkey can stick to and scale vertical surfaces.

Spidermonkey has superhuman strength, as he was capable of using a lamp post to bat Ultimate Kevin up a few feet. He also has enhanced agility, and has enhanced hand-to-hand combat skills. It was mentioned that Arachnichimps, and thus Spidermonkey, have hearing superior to a human's.

Spidermonkey can get tangled by his own webs. Sometimes, villains can use Spidermonkey's webs to their advantage.

Spidermonkey's webs can be frozen and made brittle.

Spidermonkey's webs can be melted by Chromastone, shown in Good Copy, Bad Copy

Retrieved from "https://ben10fanfiction.fandom.com/wiki/Spidermonkey_(TNO)?oldid=772577"
Community content is available under CC-BY-SA unless otherwise noted.