Spidermonkey is the Omnitrix's 1.5 DNA sample of an Arachnichimp from Aranhaschimmia in Ben 10: Omnitrix Unlimited. He is the Dimension 1 equivalent of Spidermonkey.

Before the Omnitrix's 1.5 recalibration in Ben 10: Across the 23rd Dimension, Spidermonkey had his Omniverse appearance. 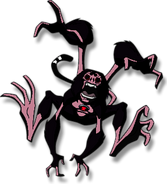