Speedair: Downfall of a Hero is the first and only episode of the 1st season of Powerful Lords: Origins.

The scene starts in a dark room. the camera turns to Speedair. he can only be seen till his chest. His head is looking down. He looks up straight at the camera

Speedair: Hello, My name is Speedair. I'm a part of the Powerful Lords. I'm Second in command. Everyone knows what I can do and are afraid. I like that. But not many know my true origin. Not that they should, my origin story can be used against me. But I hate it when people get it completely off. I wasn't always evil. I was once a hero, to be honest. Anyways, I started out as a normal kid. I grew up without a father. Never even met him. At school, I was a reget, an outcast. I wasn't different. I was just smart. Quite Smart. Well, i was living my regular reject life when I and my friend found the Accelertrix...

The screen fades to a forest scene. Reo and Mick are walking trough a forest.

Mick: Why are we here?

Reo: I want to show you this epic place I found. It's cool.

Mick: Oh, well, what's so cool about it?

Reo: there's a lake, an epic BMX track and it's pretty!

The Two come out into an open space. the camera switches to their view. They see a lake, a beautiful place to just relax.

Mick: Wow! This is sweet!

Then they notice something off. They see a hole in the ground. they walk to it and see a rock of some kind in it.

Mick: Should that be here?

Reo slips and falls into the hole. He notices a somewhat watch.

Mick: What? Who would leave a watch there?

Reo: Maybe someone got hit and is under there.

Mick: Maybe we should leave?

Reo takes a closer look at the watch. The watch actives and glows. Reo Takes it and puts it on.

Mick: What are you doing? The watch glows red and blue and flashes. A Kineceleran stands out

Mick: Ahhh! What the Hell? Reo, that you?

Kineceleran: Yeah? Is something wrong? Wow, my voice sounds weird.

Reo walks to the lake but falls and his head falls into the water. He gets out and sees his reflection.

He looks at his hand for the watch as the screen fades back to speedair.

Speedair: So, that's how I found the Accelertrix. I and Mick were the only ones to know. We used this power to spy on some people, pull some pranks. I even used it to scare some people and only once to beat someone up. I used it also to save some people from burning houses and stuff. Then one day, I had no chance.

The scene switches to a small city. Reo is walking on the streets. it's a spring day. He looks behind his back and notices his enemies. He looks back forward and sees some more.

He walks on forward. The guys in front block his path and start saying hi and insulting him at the same time.

He tries to get trough them but gets pushed back, only to be caught by the guys behind.They start to push him around. Reo tries to stop, but he gets hit and insulted. Reo Yells

And Than Reo rages out, He starts punching them guys, but all of them start punching him. He gets thrown on the ground. Kicked at and punched. After a few minutes, the guys leave laughing and still throwing insults at Reo. Reo is sitting on the ground with a black eye. a tear drops down his eye. He bits his lips. He looks at the accelertrix. He smiles and transforms

Rath charges towards the guys as the scene fades once again back to speedair.

Speedair: And that's when I went wrong. I started using the acceletrix for my self. You could say it took over me. I knew what I had done. I couldn't live with that. My grades started to go down aswell. And I chose to thow it away. I was in the capital city and i threw it off the bring into the river. Wrong idea. I got back and got beaten up again. But i got my grades back better. Little did i know that i was sick. It wasn't really serious, but good thing i threw the watch away. It would have only made it worse. Well, than happend something unexpected. Something that changed the life on earth

The Scene jumps to London. A Ginat Alien Warship overs over. It shoots a blue ray downwards. Metalic Red Robat Soldiers are being transported to earth from the ship. On top of the ship is a Red Figure in a black robe. He throws off his robe and jumps off the ship. He hits the ground and makes it shake and crumble. He gets up and yells

Red Figure (That looks kinda like Darth Maul): This Planet is Now Mine!! YOu stand no chance against the mighty Demonous! Speedair (Narrator): Meanwhile, i was up in my capital city. 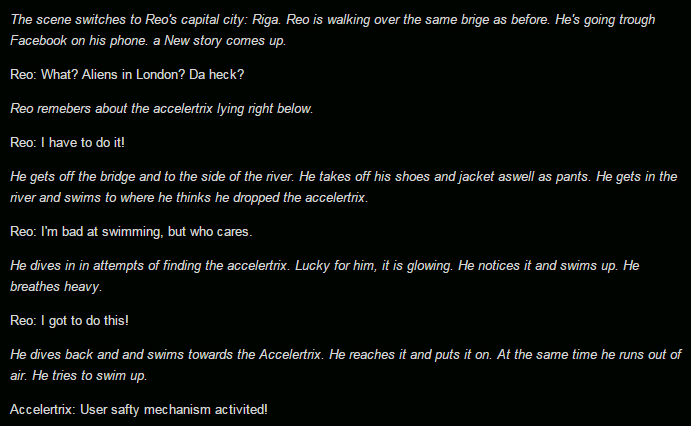 The scene shows Reo switching between the forms paralyzed on the ground.

Speedair: I managed to get up. We defeated the villain. But something went wrong that day. we all had a scar from Demonous. It became the root of our evil. I don't know about the others, but my rage. I couldn't  control it and I went and killed all my old enemies. Snapped their necks, Stabbed them. Dark Essence a.k.a. Strike XV found me. He helped me master my powers. I always wondered who helped him.

The Scene switches to Speedair shanking all rolled up. He's Scared. The Moonlight shines on him. A Dark Shadow stands in front of him. The Dark shadow is revealed to be Dark Essence.

The scene goes back to Speedair.

Speedair: He helped me. I mastered it. Soon Night Demon joined us, Dark Falcon, Black Scythe and Dark Mazeroid. I didn't want my mom to see me nor my sister. Thanks to Black Scythe, we deleted their memories of what had happened. Soon we did what we had to. We froze the time up in the Dimension. So that we wouldn't age underneath and So that we maybe would have a life after this is over. The curse would only last for 100 years, but we didn't know that then. Anyways, We went to other Dimensions and conquered them. Soon we became what we are known as today: The Powerful Lords, Conquerors of the Universe. And That would be my Origin Story. That's what made me.

Retrieved from "https://ben10fanfiction.fandom.com/wiki/Speedair:_Downfall_of_a_Hero?oldid=894937"
Community content is available under CC-BY-SA unless otherwise noted.