The SpecTrix is a new kind of Omnitrix that debuted in Tech 10: Rebooted.

The Specialty Omnitrix, or SpecTrix, was created by Azmuth for the purpose of experimenting with DNA, but due to the actions of Vilgax, it unintentionally fell into the hands of Tech, who now uses it to fight crime, keep the planet safe, and mostly do pointless crap. Azmuth immediately set to work on designing another one, muttering about how ridiculous it is that this kind of thing keeps happening all the time.

In Fatal Light: Part 2, the original SpecTrix was halfway disintegrated by Dethrouge, rendering it unusable.

In Much Ado About Aliens, Tech received a new version of the SpecTrix from Azmuth, which, while virtually Identical in use, has several important differences.

In Forever To Say Goodbye: Part 2, the SpecTrix was destroyed again, exploding after being forcibly ripped out of Tech's chest and smashed into the Anti-Life Entity's, then activating the de-evolution function. The explosion created a devolving shockwave of energy that transformed Tech from Ultimate Tech Delta to simply Tech Delta, and returned the Anti-Life Entity to its human state, where it promptly faded to dust.

The third SpecTrix was created at some point afterwards, using the same blueprints as the second. Tech decided to customize this one, changing the body to a deep blue and the touchscreen to a vivid orange.

The Spectrix is similar to the Ultimatrix in shape and color, but has a longer, box-shaped body that is mostly taken up on the top with a blue touchscreen that shows all the functions.

The Intergalactic Peace Sign, usually affiliated with the Plumbers and most transformation Technology, takes on a slightly irregular shape, being wider on one end.

Since the original SpecTrix was never intended to be used publicly and was never fully completed, there are a few bugs in the programming and design, which range from quirky to dangerous.

These bugs have been fixed for the most part in the second SpecTrix. 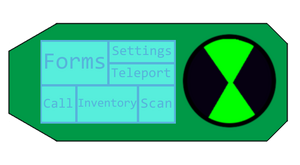 SpecTrix 2.0 (Destroyed while fighting the Anti-Life Entity)
Add an image to this gallery

Notable alternate version of the SpecTrix include:

Glam SpecTrix
Add an image to this gallery

Retrieved from "https://ben10fanfiction.fandom.com/wiki/SpecTrix?oldid=859375"
Community content is available under CC-BY-SA unless otherwise noted.