Sparky is a character in the series, Brandon 10.

In Alien Force, Sparky looks like a dog shaped alien with black and green/yellow-ish colors. He also has a lightning resembled head tip.

In Ultimate Hero, Sparky's appearance does not change majorly from his Alien Force appearance.

Sparky has the abilities of both Galvanic Mechamorph and Electron species. He can absorb technology and upgrade it into a weapon or tool, fire electric blasts, shapeshift and more. He can also reshape into technology he absorbed for later uses, like being a starship, for example. As seen in Prince of Mars, Sparky can merge with people and form a suit of armor which provides durability and limited air supply. In Brandon 10: Ultimate Conquest, Sparky has improved on this ability and can now fire lasers from an arm blaster turning the space suit to a battle suit. 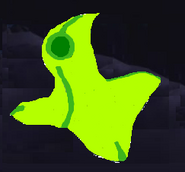 Sparky in Date Night
Add an image to this gallery
Retrieved from "https://ben10fanfiction.fandom.com/wiki/Sparky_(Brandon_10)?oldid=780834"
Community content is available under CC-BY-SA unless otherwise noted.