Agent South Dakota, or "South" for short, is an agent for Project Freelancer in Bryce Bowman: Origins.

South is a loudmouth, opening complaining about the Director's decision to let Carolina take charge. She is seen as her brother's opposite.

It has been noted that South displays excellent skill when it comes to stealth. This is why she was assigned to retrieve the Entropy Modulator.

Being a Freelancer, South exhibits exceptional skill in hand-to-hand combat, though she seems to have higher skill in this area than most Agents. Specifically, higher than North. 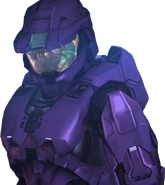