Soundwave is an Aguasonidan from the planet Acqua Succhaire in Simien 10: Polyverse and Simien 10: Blood Monkey. This is a redone version of the original page Soundwave.

Soundwave is a half humanoid made out of water. He does not have feet, but instead has a tube of whirling water which he moves on. Soundwave's "face" is mounted on a metal mask on his head which contains three yellow eyes, one on the top and one on each side, and a mouth for sonic screams. Additionally, Soundwave's water body is also contained with help of metal straps on his torso.

In Blood Monkey, Soundwave's typing quirk is only capitalizing the last letter of each sentence.

Being made out of water, Soundwave cannot be grabbed and anything will pass through him harmlessly (unless touching his mask or chest).

Soundwave can shapeshift his body, allowing him to stretch his limbs or water leg.

Soundwave can control other water sources. Additionally, he has a near infinite supply of water, as he can fire off the water or stretch as much as he wants without losing it from his body.

Soundwave can blast sonic screams from his mouth, or infuse his water with his sonic energy making it explode into a sound blast or delivering vibrations upon contact.

Due to him being made out of water, Soundwave can be evaporated with extreme heat or frozen easily.

Although most of him is water and is amorphous, his metal straps and mask are solid and can be destroyed. Destroying his straps will destabilize his humanoid form, while destroying his mask will kill him. 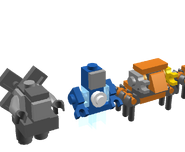 Soundwave in Simien's Alien Hex.
Add an image to this gallery
----
Retrieved from "https://ben10fanfiction.fandom.com/wiki/Soundwave?oldid=866505"
Community content is available under CC-BY-SA unless otherwise noted.