Sonance is a minor character in Tech Cross. She was the genetic donor for Burstbox.

Sonance lived a relatively normal life up until a traumatic childhood incident she refuses to disclose occurred, leaving her psychologically scarred. She wasn't permanently injured, but the trauma resulted in her going completely mute, forcing her into a silent existence.

Unable to function properly in her planet's society due to her disability, Sonance eventually moved to Earth, where she befriended the scientist Dr. Emilia Krauze. Emilia introduced her to Earth's music synthesizer technology, which Sonance found herself immediately enamored with, finally able to express her sound without the use of her abilities.

Sonance later met Tenryujin, another friend of Emilia's, and the two became inseparable, pairing up to create a band with Sonance's music production skills and Tenryujin's singing abilities. After some initial difficulty finding their footing, the two became a smash hit in Japan, capitalizing on the "cute + cool" aesthetic the pair exuded.

Being completely mute, Sonance's personality can be tough to pinpoint at first, with most outsiders viewing her as quiet and reserved. In reality, Sonance is an extremely passionate soul, with complete devotion to her partner Tenryujin and their music. She finds it difficult to express herself sometimes, but spending enough time around her will allow you to see her true warm personality.

Underneath all of that, however, Sonance bears extreme self-loathing mostly centered around her disability. She secretly views herself as pathetic for being unable to overcome her trauma, and once attempted suicide due to her belief that she was holding Tenryujin down. This self-hatred has been lessened by Tenryujin's advice and reassurance, but a small part of it remains beneath the surface.

In her natural form, Sonance has the ability to control sound; however, due to the previously-mentioned trauma, she is unable to use this ability, leaving her largely defenseless save for the protection of her armored plating.

Sonance has learned how to write in both English and Japanese, allowing her to communicate in these languages without the use of a Universal Translator.

Sonance carries around a small notepad and pen that she uses to communicate with people by writing out what she wants to say. 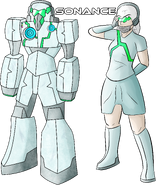