Berasnax "Snax" Halprin is an Appoplexian, born on Earth and is the protagonist in the Solstice Saga.

Snax is a large Appoplexian with orange-red fur and black stripes in miscellaneous parts of his body. He wears a brown sleeveless top that opens in the center but could be connect through buttons. He wears his grandfather's necklace, which he has for as long as he could remember. His face is that of a seasoned, grizzled man who has seen a lot. He wears bulky gauntlets when he is out and vulnerable, such as outside the walls, but he rarely wears them inside the walls.

Snax is full of paranoia and nobody wants to mess with him. He mostly keeps to himself, occasionally visiting his son. He is quick to lash out and keeps himself emotionally isolated. Only to his family is he a soft, caring man.

Snax has super strength and agility, enabling him to jump great distances and lift objects many times his weight. He also possesses a large, retractable, black claw on each wrist. This claw can be used to stab and slice opponents or to create a shockwave when stabbed into the ground. He is also extremely durable, being shown to be able to survive in space and take a point blank laser blast with no apparent effect. Snax can also release a large roar from his mouth, although this seems to be more of an intimidation tactic rather than an offensive feature. 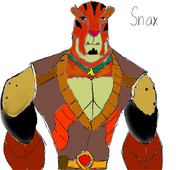 Snax in Crazy Angry Alien Tiger
Add an image to this gallery
Trivia
Retrieved from "https://ben10fanfiction.fandom.com/wiki/Snax_Halprin?oldid=840046"
Community content is available under CC-BY-SA unless otherwise noted.