Has Stinkfly's physical form made with Snare-Oh's bandages and each of his legs is just a bandage, the plate of his head, eyes and sting are of a golden metal, has Snare-Oh's chin, garment, shoulder and braces, but the garment has some V-like stripes on his neck and others black stripes on his chest, his wings are more greenier. Has the Biomnitrix symbol on his forehead as Stinkfly. 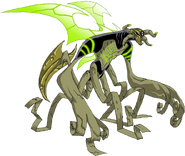 Original Snarefly from DNA Lab
Add an image to this gallery
Retrieved from "https://ben10fanfiction.fandom.com/wiki/Snarefly?oldid=866482"
Community content is available under CC-BY-SA unless otherwise noted.