Before the Omnitrix's 1.5 recalibration in Ben 10: Across the 23rd Dimension, Snare-oh had his Omniverse appearance.

Snare-oh has his Original Series appearance, but the Omnitrix 1.5 symbol is located on his chest and is colored green and black.

Negative Snare-oh has Snare-oh's Original Series appearance, but the gaps between his bandages are glowing red, the gold parts on his outfit are silver and he wears the Ultimatrix symbol on his chest, which is colored red and black. 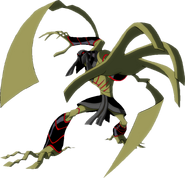 Same as his canon equivalent.

Same as his canon equivalent.