Ben 10 Fan Fiction Wiki
Register
Don't have an account?
Sign In
Advertisement
in: UltiVerse, Aliens, Ben 10: Protector of the Omniverse,
and 5 more

Snakepit is the Infinimatrix's DNA sample of an unknow species from an unknown planet in Ben 10: Protector of the Omniverse. He is the Timeline 1 equivalent of Tom Perkins' Snakepit.

Snakepit maintains his appearance as designed by Tom Perkins, but he has visible scales on his skin. His eyes are green and the Infinimatrix symbol is recolored black and green. His eyes also glow. His colors match the color palette of Heroes United.

Snakepit has "Medusa Vision", meaning he can turn his targets into stone using lightning-like laser rays from his eyes called "Medusa lasers". Those affected will only remain petrified temporarily.

Snakepit cannot be petrified by his own lasers.

If his heads are tied up together with something strong enough, Snakepit can have difficulty breaking free if he cannot petrify his attacker in time.

Snakepit's lasers do not work through reflections. 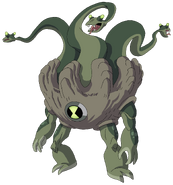 No scales
Community content is available under CC-BY-SA unless otherwise noted.
Advertisement