Snakepit is the Omnitrix's DNA sample of an Ophidian from the planet Serpentis in Earth-1010.

Snakepit is a large, four-armed humanoid snake. His body is long and winding, covered mostly in purple scales with tan scales on his underside. His head is identical to those of Earth snakes, and the Omnitrix symbol is on his forehead.

Snakepit is a powerful constrictor. When he wraps himself around his prey, few are powerful enough to break free. The crushing powers of an Ophidian like Snakepit is enough to crush several steel beams at once.

Snakepit can generate venom in the sharp claws on his hands.

Snakepit has the power to climb- or rather, slither- up and along walls.

Snakepit is a very weak fighter, especially if caught off guard. He is best suited to fights where he can constrict his opponent.

Ophidians have an instinctive fear of fire. This fear often overpowers any kind of rational thought.

Having only two fingers per hand makes grasping small objects or fine manipulation diffuclt without using at least two hands.

Snakepit was unlocked by Ben Prime by scanning a Ophidian "Archeologist" he agreed to help explore a tomb on Cranvius in Dead London. His ability to climb walls proved useful, though Ben later found Vertebrain and Hivemind better suited to navigating the crypts.

Snakepit was first unlocked by Ben 10'000 sometime after Death of Ben 10 but before Ken Tennyson turned 10 years old. At some point before Ken receives his Omnitrix on his tenth birthday, Ben shows him what Snakepit can do but Ken was not impressed. This alien was one of Ken's original set of 10, much to his disappointment.

Snakepit if he had ever appeared prior to Road Trip 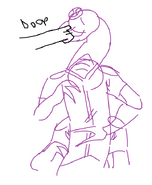