Smallarge's eye is like a circle with a line coming from the bottom and top. When he closes his eye, it looks like a plus, referring to his ability to grow. On his chest is a line resembling a minus, referring to his ability to shrink. The Omnitrix/Ultimatrix symbol is in the middle of the minus. When he talks, his eye flashes, similar to Upgrade. He can also fire an energy beam out of his eye. Also, when he grows, his eye flashes green. When he shrinks, the minus on his chest flashes green.

In Omniverse, Smallarge has arm braces and boots,and his hands are black. His Omnitrix is now on a green belt on his waist.

Smallarge has the ability to grow and shrink between 0.5 mm to 1000 feet. He can also fire an energy beam out of his eye.

Smallarge is not very fast. Smallarge can be easily crushed and killed in his smaller form. In his bigger form, he could kill his smaller allies by stepping or falling on them.

He will also appear in Finn 10 in the episode "Super Size."

He is one of Brian's aliens. He was briefly mentioned in Brian 10.

He is one of Noah's new aliens. He makes his debut in One Size Fits All. It is revealed his size changing has limits.

He'll appear in Ben 10: Invincible Alien in Season 2 to fight the antagonist.

His debut episode is currently unknown, but will be in season 3. His skin is a darker tint (or shade) of gray. His trix is now red., and his eye color stays the same to match with his lines, which were decided to stay green.

In Zero Hero, Smallarge isn't used as an alien. Instead, Zero uses the powers of the alien without changing into the alien's form (similar to Ben 10,000 in UA). When Zero uses Smallarge's power, he becomes surrounded by a gray aura.

In Super Omniverse, there will be a version of Smallarge named Shrinkbrain who is based off a character in the Beetlejuice movie.

Smallarge now has an ultimate form.

Smallarge has a voice similar to Ultimate Echo Echo's, but in a higher pitch.

Smallarge is an alien in Stew 10, but is currently locked.

He is a new alien ned will get.

Smallarge will be a new alien in Ben's new Omnitrix.

He has arm braces, gauntlets, and boots, and his hands are black. His Polytrix is on a green belt on his waist. He has red Polytrix symbols paved into his black gauntlets. There are red stripes on his boots. His eye is yellow, and his tail is covered by pants, which are black in the front but red in the back.

Smallarge and his evolved form will appear in the game as Reo54's alien transformation. He's something of an outlier in the game's aliens in that he has no specific element, leaving him with no particular strengths or weaknesses.

Smallarge might appear in this series, perhaps during Season 2 or 3.

Smallarge and his evolved form will appear in the game as Reo54's alien transformation. He's something of an outlier in the game's aliens in that he has no specific element, leaving him with no particular strengths or weaknesses.

Smallarge is one of Angel's ten main aliens.

Smallarge is one of the new 10 aliens in the Omnimatrix II given to Ben by Azmuth. 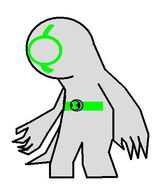 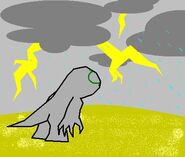 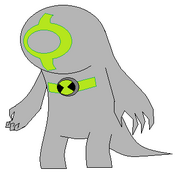 Smallarge in One Size Fits All (Noah 10). 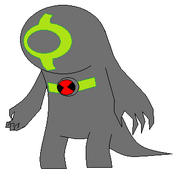 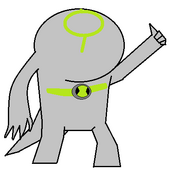 Smallarge giving a thumbs up 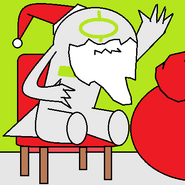 New Smallarge Design (based on the redesign idea of Ben 10: Omniverse)

Finn Smallarge (based on the redesign idea of Ben 10: Omniverse) by LEGOpug4 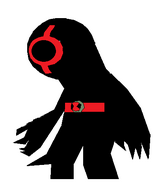 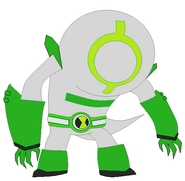 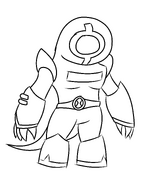 Smallarge's current design (no color, drawn by Thomas, in PaintTool SAI)
Add an image to this gallery
Retrieved from "https://ben10fanfiction.fandom.com/wiki/Smallarge?oldid=866454"
Community content is available under CC-BY-SA unless otherwise noted.