Slime is a white humanoid blob. His head is round with slime hair over one of his eyes. His body resembles Goop’s body from Alien Force. His Anti-Gravity Projector has his Omnitrix covered by a small version of Otto's face. It is unknown whether Otto's voice comes from the Omnitrix or his face.

He is completely liquid. He could throw a punch from anywhere on his body. His slime is also selectively acidic or adhesive.

His Anti-Gravity Projector has Otto’s face, giving him a lookout and sentry. Otto can also shoot eye lasers. 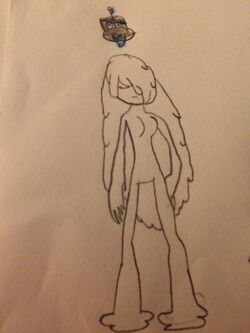