Skyshark is an Alien in the Alphatrix in Sif 100: Alienated!

Skyshark is a beastly shark-like Alien with wings. Skyshark's head is all gray, with a few grey spikes on the side of his jaw. He has steel teeth, with two big ones on the sides. There is a stick shape above his mouth, which goes up to another stick shape, but sideways. At the end of the left and ride side of the stick shape, theres his eyes. Above the eyes, are spikes. His chest is a greyish color, with his back being green. His wings are all red, with some black squarish shapes. The wings can be used in cloak form, mostly similar to Ultimate Kevin. His arms are all green, with some grey squarish shapes, and sharp claws. His legs are similar to the arms, all green with grey squarish shapes, and sharp toes.

Skyshark has the ability to fly with his wings. His flight is very advanced, he can turn at ease, he can land at ease. He also has very fast flight.

Skyshark's teeth can bend through nearly anything. His teeth are much stronger than Piranhagator and Ripjaws. They are also very sharp, making eating much easier.

Skyshark has incredible strength, he is able to lift 120 tons with both hands.

Skyshark can breathe underwater, like a normal shark. He can stay underwater for as long as he'd like. What comes with underwater respiration, is his very fast swimming, in which he can swim similar to a manta-ray.

Because of his air and underwater nature, Skyshark has very enhanced eyesight. He can see in the air perfectly fine, same goes with land and water.

Skyshark's immense size makes him an easy target to shoot.  Skyshark is limited with moving his head. He can try to move somewhat sideways, he can look up with slight ease, but he is unable to look down. Skyshark will sometimes feel urges to act greedy and angry. This is all because of the nature of the Sharcasia. 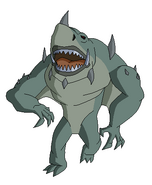 Original Design - Now Used for Pre-Puberty Sharcasia
Add an image to this gallery
Retrieved from "https://ben10fanfiction.fandom.com/wiki/Skyshark?oldid=805688"
Community content is available under CC-BY-SA unless otherwise noted.