Size Man is an alien transformation in the series, Brandon 10.

Size Man takes on a humanoid appearance. His skin appears like grey armor with several black lines and red patches/lines on it including on his shoulder plates and mid-section. His head resembles a helmet which has two ear supporters, similar to headphones, with two green lines on each side and a mouth piece that sticks outwards slightly. His helmet also splits into two revealing a black patch as the rest of the helmet sticks upwards. His eyes are big, green and very roundish. His neck is a dark grey and his collar is black which continues downwards on his chest which then splits into two parts which leads towards his back. On his mid-section, he has abs and a roundish triangular end which leads onto his legs. In between his mid-section and his legs is a light grey patch. His legs are grey and his boots have a black lining around them. His arms have a red finger-less glove-like feature which reveals his skinny, grey fingers. On his chest is the Ultimatrix symbol.

Brandon spins around in DNA and curls up due to the changes. His ribs enlarge and the armor plating form around his arms and chest. His head forms a helmet like structure. Within a flash, Size Man appears.

Size Man, if not obvious from his name, has the ability to change his size without any limit. While his Size-Changing Aliens does not need to be exact, he usually sets it into three different types of sizes: Tiny, Average and Gigantic. Size Man also has a ying yang type of addition to his abilities. The smaller Size Man becomes, the smarter he gets which grants him the ability to hack systems and analyse situations quicker. When in a larger size, Size Man is granted with super strength and enhanced durability.

While becoming smaller makes Size Man smarter, becoming larger will limit his ability to think making him not very intelligent however he does not become stupid but he doesn't rely on wits as much. When Size Man is in his smaller sizes, he is more exposed to larger threats and he can not block attacks like he can in his larger sizes.

In Showdown in Little Tokyo, Brandon unlocks Size Man and uses him to defeat TEKBOTSs.

In The Hungry Alien, Size Man fought with the Vorzzle.

In The Three Brandons, Rebel Brandon uses his version of Size Man to stop the Interceptor from crash landing.

In A Hero's Future, Brandon uses Size Man to take out two thugs.

In Dreamed a Dream, Size Man fights a giant robot in a dream.

In The Architect, Size Man manages to sneak on board Brovin's ship as he leaves the Earth's atmosphere. 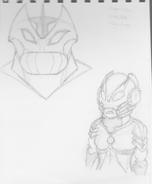 Size Man Trading Card
Add an image to this gallery
Retrieved from "https://ben10fanfiction.fandom.com/wiki/Size_Man?oldid=866423"
Community content is available under CC-BY-SA unless otherwise noted.