Similamander is the Omnitrix's DNA sample of a Mimewt from the planet Alpha Proxima. He is a free use alien.

Similamander is a quadrupedal alien with murky green skin. There is a double helix-like marking running down his spine. The Omnitrix symbol is on his chest.

In The Alan 10 Adventures, Similamander has brown skin, red eyes, and the Simplicitrix symbol on his chest.

Similamander's main and, possibly, only power is his ability to mimic the powers of his foe.

He is also agile and nimble, helping him escape predators.

Similamander can only mimic the powers of his foe, not the talents. This means that his powers will always be weaker than the creature he copies simply because he won't be able to use it as well. Using these powers is also somewhat straining on Similimander. The more powerful the power he tries to mimic, the lower percent of that power he will actually be able to replicate. For example: He could mimic a Pyronite's fire breathing with ease, but he would never be able to replicate the powers of a Celestialsapien.

He can only copy the powers of creatures immediately present. Once that creature leaves he can only sustain his own new powers for around an hour, maybe less.

He can only copy 'organic' powers. That means he can only copy the powers of purely organic species, and not partially mechanical or technological species like Galvanic Mechamorphs or Chronosapiens.

He also copies the weaknesses of the creatures that he mimics. 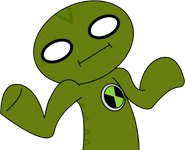 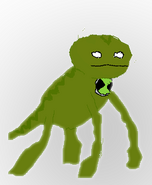 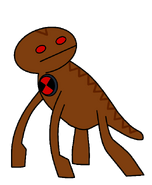 In The Alan 10 Adventures

Similamander is a portmanteau of 'Similar' and 'Salamander'.