Silver Mt. Zion is an alien from Tech 10: Star Spirit.

Silver Mt. Zion is a silver humanoid alien donned in metallic silver armor. A helmet covers most of her face, and two silver rings orbit her body. She has six wings on her back that don't seem to move when she flies, and she has Holy Fire constantly streaming from her wrists and ankles.

The rings orbiting her each have six eyes on them. When a phantom is dispatched, one of the eyes opens and glows white. If all twelve eyes on the the ring are opened and the final phantom is sent out, then the center portion of her helmet will withdraw to reveal the smaller thirteenth eye.

As stated by Herc in Blood and the Moon, Silver Mt. Zion is apparently huge, being too large to fit inside a cargo elevator.

Silver Mt. Zion is only able to create a maximum of 13 phantoms at any given moment, limiting the amount of people she can protect. In addition, she has practically no offensive skill outside of her Holy Fire.

This may or may not be considered a weakness, per se, but when her Holy Fire purifies its target of immoral ideologies, what is changed is not up to the user; rather, the purification process follows a single truth: anything destructive or harmful to any part of the universe is seen as "immoral".

Silver Mt. Zion is a Praesignis from an unknown planet. Not much is known about the Praesignis, as they evidently vanished millenia ago, leaving behind only myths and hearsay. Given that Swarm 2 has a scan of their DNA, it can be assumed that they still exist somewhere in the universe, but it is currently unknown where. 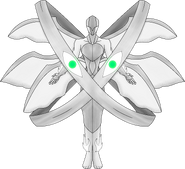 One of SMZ's Phantoms.
Add an image to this gallery

Retrieved from "https://ben10fanfiction.fandom.com/wiki/Silver_Mt._Zion?oldid=867677"
Community content is available under CC-BY-SA unless otherwise noted.