Start a Wiki
Shredder is an alien transformation in the series, Brandon 10.

Shredder is a dark grey, humanoid with hard, metallic skin. He has two eye socket-like horns that stick upwards. On his head is a black stripe that moves downwards but stops in between his eyes. He has two sharp teeth that stick out upwards from his lower jaw.

Shredder has the ability to slice through nearly any material due to his skin. He is also durable to most attacks. He also has he ability to control small amounts of metal as seen in Fame's Game when he crushed Mark Knight's armor. He is also very strong.

Shredder is prone to get angry a lot which affects his thinking and clouds his judgement, unless someone breaks through to him, which causes him to do actions that he never planned on doing.

In Tomb Raider, Shredder fights against the Mummy.

In Race, Shredder frees himself from an alien plant.

In The Architect, Shredder fights against Brovin but is ultimately defeated. 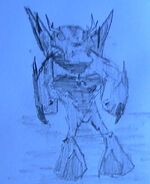 Shredder Trading Card
Add an image to this gallery
Retrieved from "https://ben10fanfiction.fandom.com/wiki/Shredder?oldid=842949"
Community content is available under CC-BY-SA unless otherwise noted.