Shocksquatch is the Infinity's DNA sample of a Gimlinopithecus from the planet Pattersonea in Bryce Bowman: Origins.

Shocksquatch has the appearance of a thick, muscular Sasquatch-like alien.

He has white, gray, and blue fur, along with a red face, and pointed eyebrows.

He also has yellow eyes.

He has metallic gray circular bolts on the back of his hands and on his lower jaw.

White fur, surrounded in yellow electricity, grows from Bryce's arms and face. He spins while his body expands, his muscles increasing greatly and the fur continues to grow. Electricity flows around his body, forming silver bolts on his hands and chest, and two smaller ones on his lower jaw. Shocksquatch poses with his arms up, sending electricity in all directions.

In Hunted (BBO), Shocksquatch fought Sixsix and Kraab and easily defeated them. This was his first appearance.

In Secret Revealed, Shocksquatch fought and defeated the Circus Freaks for their first appearance.

In The Father, Shocksquatch was used to finish off the OmniDroid.

Shocksquatch has the ability to release strong, yellow electrical charges from any part of his body.

By covering objects with his electricity, Shocksquatch can telekinetically move them.

Shocksquatch is helpless when he is insulated.

Shocksquatch's electrical powers are useless if the enemy has enough insulation. 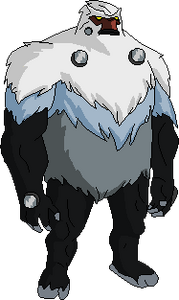 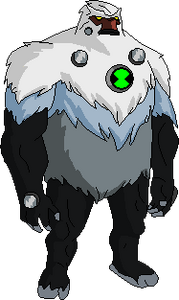 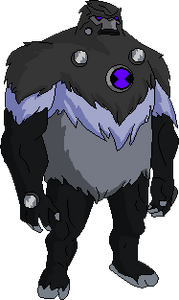