Start a Wiki
Shock Speed is an alien transformation in the series, Brandon 10.

Shock Speed is a slightly short, blue humanoid. He has a black cone-like helmet with a retractable, light blue, clear visor and a pointy chin. His neck is black and ends with a yellow, jagged collar. Around his arms are yellow gauntlets with black sides and blue bars on it. On his stomach is a black stripe which goes down until it stops at the ragged tip of the pants in a lighter shade of black. His boots, which are black, have a similar ragged, yellow tip like his neck collar. Shock Speed also has a skinny tail which looks similar to a cord. On his back, there is a pack or shell similar to a big battery which is connected to his tail cord. The Ultimatrix symbol is on his chest and the bottom tip of the yellow, jagged neck collar.

Shock Speed has the ability to produce short bursts of electricity from his hands or, more specifically, his gauntlets. Electricity can also be charged through his tail cord. He can also absorb electricity and redirect its channeling. Because of the electric energy built up inside of him, Shock Speed has the ability to change his electric energy to kinetic energy and run at super speeds. While running, Shock Speed can reach places in less time and, as seen in Mind over Matter, can run up vertical surfaces. He also has the ability to activate his visor which is built into his helmet. Once the visor is activated, he can pin point targets easily which can assist him in navigation as well as combat. Shock Speed is strong enough to carry a person but only while running.

Because of him being an electric type alien, he can be affected greatly by water and other liquids. His super strength also goes away when he is not currently running.

In Mind over Matter, Shock Speed first debuted and saved a group of motorcycle riders.

In Welcome to Atlantis, Shock Speed disarms the Cepian Army.

In James Saves the Day, Shock Speed was mind controlled into attacking James

In A Hero's Future, Shock Speed took out the hooded minions.

In Gone, Shock Speed runs across the whole nation.

In To The Extreme, Shock Speed takes on an Extreme Biker squad. 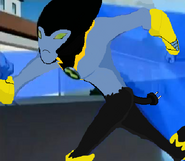 Shock Speed in The Big Electricity
Add an image to this gallery
Retrieved from "https://ben10fanfiction.fandom.com/wiki/Shock_Speed?oldid=866405"
Community content is available under CC-BY-SA unless otherwise noted.