Overview
A year after every series, a team of 7 heroes (Ghasten, Sif, Richard, Ty, Cooper, Mig, & Rex) come together with a common goal: Save the world.
Characters

Episode Guide
Fan List
If you're a fan of the long running superhero team-up show Shield of Justice, put your signature below! (~x4)
Trivia
Gallery 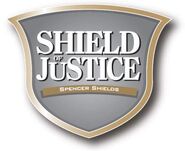 Series Logo
Add an image to this gallery

Start a Discussion Discussions about Shield of Justice