Shellhead is the Omnitrix's DNA sample of a Geysersheld from the planet Tartarek set to appear in Bryce Bowman: Devil's Bounty.

Shellhead is a turtle-like alien, who's not much taller than Bryce, when standing straight up.

His skin is covered, primarily, in greenish-grey scales with small patches of green scales on his shoulders and knees.

Shellhead has four fingers and three toes, each ending in small grey nail.

He has a turtle shell on his back with intricate designs, unique to each member of the species. The shell is mostly brown with sea green underneath.

Shellhead can stand and walk on his hind legs, but he stands hunched over, and he prefers to walk on all fours.

He has sea green eyes as well.

He wears the Omnitrix on his shell, just behind his head.

The Omnitrix glows brilliantly on Bryce's wrist as he rotates slowly. His back hunches and he reaches down to the ground with his fingers morph into two and his thumb engorges. A grey turtle shell breaks its way through his shirt, sea green cracks shining. He looks up. Shellhead stands up and poses with his back to the camera, the light from his shell taking over the scene.

At first glance, it would appear that Shellhead's only ability it to hide in his shell, but this is not the case. His shell is virtually indestructible, and only few materials have been known to pierce it, and even then only to a minor degree.

When Shellhead takes physical attacks to his shell, the sea green cracks light up, absorbing the kinetic energy. This energy is then transferred to an organ in his chest, next to his heart, that creates an ultra-concentrated plasma beam.

His plasma beam can tear through all Earth materials and has been seen, with enough energy built up, began to melt a Prypiatosian-B's containment suit.

He can only fire this beam for a very brief time, usually only going for about a single second.

While the inside of Shellhead's mouth is coated in scales, it still hurts him to fire his plasma beam.

The more kinetic energy he absorbed before firing increases the beam's intensity.

Shellhead uses his keen eyesight to help him aim.

He is quite strong, but his strength is centered in his legs to keep him from falling over or knocking himself back while using his plasma beam.

Shellhead cannot control the intensity of his plasma beam, and specifically he cannot reduce the intensity to increase the duration. If he takes in too much energy, he could actually end up activating the Omnitrix's failsafe and revert himself from the damage of firing his beam.

If Shellhead does not expel the plasma inside him, he could burn himself out from the inside.

Shellhead is very slow moving, thus hiding in his shell is all he can do to avoid oncoming attacks. While this is a good defense, counter attacking isn't an option outside of his plasma beam; which can be difficult to control and aim. This is mostly because he can't do a lot of quick movements. Additionally, he must be firmly planted on the ground to fire his plasma beam, otherwise he could be swept off his feet. 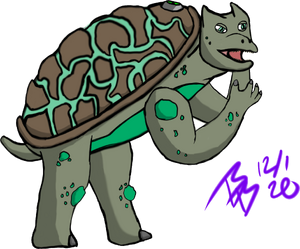 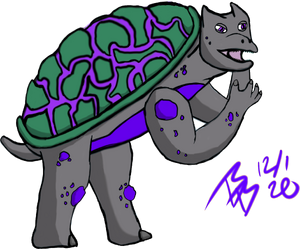