Selenic is a minor character in Tech Cross. She was the genetic donor for Lunaqua.

In her natural form, Selenic has the ability to manipulate and merge with water, making her a formidable force around any decently-sized water source.

She can use the bubbles created by the liquid tendrils on her back to focus light like a magnifying glass, creating beams of intense light energy.

Most uniquely, she can create a field of darkness around herself to trap her opponents in that mirrors the night sky, with a false "moon" made of light from the surrounding area acting as an extra layer of focus for her light beams, making them significantly more powerful. 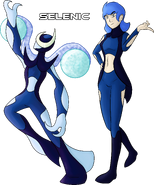 Retrieved from "https://ben10fanfiction.fandom.com/wiki/Selenic?oldid=876983"
Community content is available under CC-BY-SA unless otherwise noted.